From the National Library of Scotland (www.nls.uk): 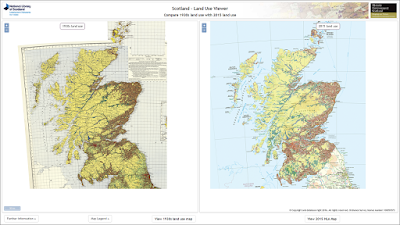 This new viewer is a collaboration with Historic Environment Scotland, and allows 1930s Land Utilisation Survey maps to be compared to the 2015 Historic Land Use Assessment Layer (HLA). The link is http://maps.nls.uk/series/land-utilisation-survey/index.html

The HLA layer has been deliberately coloured to closely match the six main categories of the 1930s Land Utilisation Survey and shows striking changes in Scotland's land use during the 20th century, including afforestation and expanding urban areas. At the local level, you can see new reservoirs, roads, and significant changes to patterns of farming.


In other NLS news, the Scotland on Film website has also been updated at https://scotlandonscreen.org.uk.

Screen website has re-launched with improved capabilities. This educational website, built in partnership with Education Scotland and Creative Scotland, can now be viewed on all platforms including tablets and smartphones.

Containing hundreds of free-to-watch short films and clips from our Moving Image Archive, the website also has guidance on how to use archive film in school projects and lessons.

Finally, the new NLS blog is now up and running at http://blog.nls.uk.

(With thanks to the NLS)

For details on my genealogy guide books, including my recently released Discover Irish Land Records and Down and Out in Scotland: Researching Ancestral Crisis, please visit http://britishgenes.blogspot.co.uk/p/my-books.html. My Pinterest account is at https://www.pinterest.com/chrismpaton/.
Posted by Chris Paton at 18:34