The Irish Government's official programme for commemorations of the 1916 Easter Rising is outlined on a website at www.ireland.ie, which includes a short 8 minute video outlining some of the highlights. Amongst these are contributions from some well known faces from the National Library of Ireland and the National Archives of Ireland, with announcements of exhibitions and digitisation projects, as well as an ancestry project for school children to try to work out how to trace back to ancestors alive at the period. The video is on YoutTube at https://youtu.be/1RKER4WYl2I and also reproduced here for convenience: 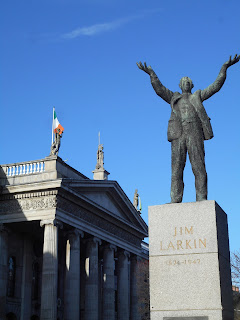 I am currently working hell for leather to produce a short introductory genealogy guide book for Unlock the Past (www.unlockthepast.com.au) on the subject of the Decade of Centenaries from 1912-23, looking at everything from the Ulster Covenant to the Irish Civil War. This will not only examine how to research ancestors connected to the constitutional struggle, but also the First World War, women's suffrage, the Dublin Lockout, and more. One hundred years ago there was no Northern Ireland or Republic of Ireland, it was all a single constituent part of the United Kingdom. It's a period which until now has been tantalisingly close to us in ancestral terms, but rarely talked about. The governments north and south, and others, are to be commended for the programmes being put together this year, whether commemorating the Rising or the Somme, and everything else in between and beyond in the period.

The BBC also has a feature on the commemorations programme at http://www.bbc.co.uk/news/world-europe-35247856, and a feature on 1916 itself at http://www.bbc.co.uk/timelines/z2c4j6f, including the interesting detail that in 1916 Ireland's time zone was aligned with that of London - prior to this the island actually had a time zone that was 25 minutes behind England. You learn something new every day.

For details on my genealogy guide books, including my recently released Discover Irish Land Records and Down and Out in Scotland: Researching Ancestral Crisis, please visit http://britishgenes.blogspot.co.uk/p/my-books.html. My Pinterest account is at https://www.pinterest.com/chrismpaton/.
Posted by Chris Paton at 12:34