From the Ulster Historical Foundation (www.ancestryireland.com):

For those of you looking for your Ulster Ancestors before 1800 the Fighters of Derry is one of the best sources currently available. 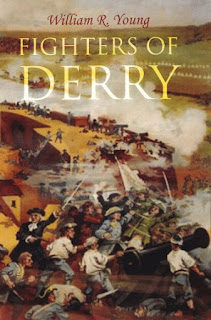 First published in 1932 William R. Young's Fighters of Derry for decades been one of the most overlooked works on the Siege of Derry and as a local genealogical resource.

For information on those who were involved in the siege of Derry in 1689 and events during the Williamite War in general, Fighters of Derry is the best source available.

This important publication lists the names of some 1,660 individuals who defended Derry or were associated with William of Orange; for many of them brief biographical sketches are provided. This book provides a real insight into settler society, particularly in north-west Ulster, in the late seventeenth century. Also included in this book is a list of 352 Jacobites, again with biographical sketches for many of them.

This new edition has seen the index revised and substantially extended.

To order go to: www.booksireland.org.uk/store/all-departments/fighters-derry-deeds-descendants

Priced at just £37.99 (RRP £47.97) this combination of books offer some of the best historical and genealogical texts relating to the 17th century.

For information on those who were involved in the siege of Derry in 1689 and events during the Williamite War in general, Fighters of Derry is the best source available. Men and Arms is essentially the first ‘census’ of English and Scottish settlers in the nine counties of Ulster and the Ulster Port Books is an underrated source for those interested in this period.

The Ordnance Survey Memoirs of Ireland provide a uniquely detailed history of the northern half of Ireland before the Great Famine. Learn not just about the houses of your ancestors, but the type of work they did, the schools they were educated in, the churches where they worshipped, the roads they got about on, and more.

For the first time ever get the complete set of memoir volumes (over 40 volumes) for just £129.99 (plus P&P) A saving over over £200! For more information please go to: http://www.booksireland.org.uk/store/all-departments/complete-set-volumes-1-40-ordnance-survey-memoirs?mc_cid=8dc3606f72&mc_eid=%5bUNIQID%5d.


For details on my genealogy guide books, including A Beginner's Guide to British and Irish Genealogy, A Decade of Irish Centenaries: Researching Ireland 1912-1923, Discover Scottish Church Records (2nd edition), Discover Irish Land Records and Down and Out in Scotland: Researching Ancestral Crisis, please visit http://britishgenes.blogspot.co.uk/p/my-books.html.
Posted by Chris Paton at 19:00