I've had a day now to play with the new historic birth, marriage and death records release from www.IrishGenealogy.ie (see http://britishgenes.blogspot.co.uk/2016/09/historic-irish-bmd-records-freely.html), and I have to admit, for what is there, I'm seriously impressed - and not just because they are free 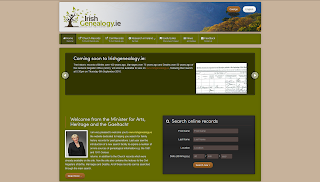 First, though, it is worth stating what is not there. The records in Ireland have historically been indexed by the General Register Office in Ireland by year, quarter, registration district, volume number and page number. At present you have to order record copies from the GRO by paper based application (including writing down credit card info on the application form), and then receive a copy either in the post or by email. In recent times, however, a separate project by the Health Services Executive has seen the records digitised for instant online purchase (with an ability to pay for them online). This is an ongoing programme, with many of the historic images still to be scanned, but for those that have been digitised a new index reference is given, called a Group ID number. It is these digitised records that are now freely available on the IrishGenealogy.ie site, but as the project has not been completed yet, many records are not yet available. From what I can see, digitised images of nearly all birth records from 1864-1915 are online, but only the later marriage records (up to 1940) and death records (up to 1965), so there are more to come. The bottom line when searching is that if a record is presented with a Group ID number, there will be an accompanying record image you can click through to; if only a year, quarter, registration district, volume and page number are presented, there is no image - yet. 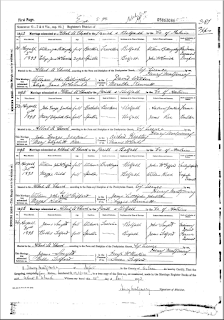 So what is there? Well, as noted, virtually all births records from 1864 to 1915, and many later marriage and death records. Perhaps the most completely astonishing aspect of this release is that not only are records from the modern Republic of Ireland available, but also records for what now constitutes Northern Ireland. Not too long ago the GRO in Belfast was widely applauded for making available online digitised images of northern records via the pay-per-view GENI platform at https://geni.nidirect.gov.uk. The new IrishGenealogy.ie site, by making these records available for free, will undoubtedly seriously impact on the income now going towards the GRONI. I suspect there might be some anger north of the border as a consequence, but for genies worldwide, Christmas just came early!

Bear in mind that the government in the south of Ireland only holds copies of records for the north for the period when Ireland was undivided, just prior to 1922, so GENI will still be relevant for later records, and for the earlier marriages and death records for the north not yet added to the IrishGenealogy.ie site. All Northern Irish records to the present day are also available to view at the GRONI's search centre itself in Belfast. I should say though, that I spent all of yesterday concentrating on northern based research on the IrishGenealogy.ie site, just in case those records get pulled at any point, if there is a backlash.

Another huge casualty will undoubtedly be RootsIreland (www.rootsireland.ie), which until now has been the cheapest way to obtain transcript information of civil registration records from many parts of the country. As with the recent launch of free to access pre-1880 Roman Catholic registers (http://registers.nli.ie), RootsIreland is rapidly losing its monopoly to be the sole gatekeeper of the national ancestral record, which it has enjoyed for so long. Some might argue that this is not necessarily a bad thing. Ironically, that site seems to have finally got its act together, in terms of its pricing and the access restrictions now lifted, but quite possibly with too little movement in the right direction, far too late.

On the IrishGenealogy.ie presentations themselves, one of the greatest aspects is that entire pages from the register volumes are presented, not cropped images of individual records, as with GENI. This not only means that you will avoid instances of some info being missed by cropping, but also you may find instances of multiple births that you weren't expecting - such as the discovery of a twin for my great grandfather in Belfast yesterday, who did not survive infancy. The pages are also presented in PDF format, easily saved to a computer (GENI threatens universal armageddon if you even think about saving a copy!), and in most cases they are easily legible. Remember that in addition to the basic search feature on the site, there is an advanced search facility which can help you to control searches more, which I have found particularly useful.

Quite why the Republic's government did not add a payment tier is beyond me (it could have made a small fortune from its worldwide diaspora by charging just a Euro per record, and still utterly transformed access) but it hasn't. So get in whilst the iron is hot - especially for those northern records!

NB: It's worth adding the official release of the records is actually later today, at 5.30pm, Thursday 8th September 2016.

(With thanks to the Irish Government for the release, and to Claire Santry for first breaking the newsof their early release yesterday)

UPDATE: From Claire's blog, the coverage is currently confirmed as

(With thanks to Claire)

For details on my genealogy guide books, including A Decade of Irish Centenaries: Researching Ireland 1912-1923, Discover Scottish Church Records (2nd edition), Discover Irish Land Records and Down and Out in Scotland: Researching Ancestral Crisis, please visit http://britishgenes.blogspot.co.uk/p/my-books.html.
Posted by Chris Paton at 13:25