The National Register of Archives for Scotland

Following the recent publication of PRONI's annual report, I asked the National Records of Scotland if their 2016 annual report has been published yet - it hasn't, but will be in the next few weeks. However, they did kindly provide me a link to last year's report, published in November 2015 (it's at https://t.co/xNxlXDrEgQ), which allows me to give a quick plug to a resource many folk may not be aware of.

The National Register of Archives for Scotland is the catalogue that tries to pick up what other catalogues don't - namely the records still held in private hands, such as family estate papers and business records still retained by the businesses in question. The following is the NRS report's list of work carried out for the register in 2014-2015: 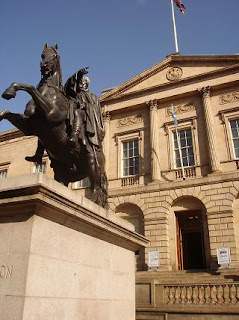 In June 2014, the National Register of Archives for Scotland, the body which locates and surveys historical papers in private hands and advises owners on their care and preservation, returned the newly catalogued archives of the Maclachlan of Maclachlan family to the chieftain, Euan Maclachlan, during the Homecoming Clan gathering at Castle Lachlan. We gave a talk at the gathering, highlighting some of the interesting documents identified during the cataloguing process. These ranged from 16th century title deeds, giving an insight into early Highland life and customs, to records of the Argyll Fencibles in the mid-18th century. The 19th century letters of George Campbell as Lord Lorne and then 8th Duke of Argyll, to Robert MacLachlan, shed light on the former's views on a range of issues including the Disruption of the Scottish church in 1843, schools for the new Free Church, the indebtedness of the Argyll estate, political issues at Westminster relating to free trade and political reform, and, more locally, Argyllshire roads, bridges and railways.

The NRAS catalogue is accessible on the NRS website at http://catalogue.nrscotland.gov.uk/nrasregister/welcome.aspx. If you find a collection on there of interest, you need to apply to the Register to write to the records holder on your behalf to seek permission to view them. Note that if records are held in private hands, you absolutely do not have the right to view them - it is entirely at the discretion of the owners as to whether you can or not (so be nice and humble!). As the NRAS itself states on its website, "An owner’s decision not to give access may seem arbitrary to researchers but there are often very good reasons why they cannot, and they are under no obligation to tell us why. Researchers should also remember that access to private papers is a privilege and not a right".

The process can take a while, perhaps up to a month, to get a response, but it can be certainly worth it. Many years ago, for example, I discovered that the records for the Weavers Incorporation in Perth were held in private hands through the NRAS, and after going through the process, I obtained permission to view them. Quite apart from the joys that perusing the records produced, it also opened a dialogue with the caretaker of the records, where I suggested that the local archive might be a place where they could be better stored, rather than the ad hoc arrangements that had been entered into by the records' custodians to have them looked after at that stage. About a year after I had finished with consulting the records I was delighted to learn that they had been subsequently deposited at Perth and Kinross Archives. Many collections, however, are perfectly well looked after by their custodians, indeed, treasured by them - they just simply exist beyond the public domain.

If you cannot find records that you are interested in through the National Records of Scotland catalogue (http://catalogue.nrscotland.gov.uk/nrsonlinecatalogue/welcome.aspx), or the Scottish Archive Network catalogue for local archives (www.scan.org.uk/aboutus/indexonline.htm), try the NRAS - you might just find that the records do exist!

(With thanks to the NRS)

For details on my genealogy guide books, including A Beginner's Guide to British and Irish Genealogy, A Decade of Irish Centenaries: Researching Ireland 1912-1923, Discover Scottish Church Records (2nd edition), Discover Irish Land Records and Down and Out in Scotland: Researching Ancestral Crisis, please visit http://britishgenes.blogspot.co.uk/p/my-books.html.
Posted by Chris Paton at 10:24