Back in June I started a series of posts on this blog detailing my attempts to claim an Irish passport, in the wake of the Brexit vote. In my last post at the start of July (part 3), I detailed how I filled out the relevant forms, including the seeking of a witness to sign the passport photographs and the form itself, and how I then posted it. I was advised that the process would take about seven weeks to turn around the application.

On the Friday just prior to my trip to the States last week I received a phone call from the passport folk in Dublin. They had my application (and those for my two sons), and had had some problems contacting the witness, but were able to confirm his identity from other means online; the call was simply to verify that I was confirming the applications for my two boys, as one of their parents (my wife received a similar call at her work). Both of us gave the necessary confirmation, and that was that. We were then informed that the passports would be sent in the diplomatic bag overnight to London, but with the English bank holiday approaching, it would likely be the middle of the next week that they would arrive.

By this time I was in the United States for the FGS conference, but last Thursday I received a message from my wife that they had been delivered to our house. It was a huge personal moment for me, and I was delighted to announce to my American audience that as of that day I now held dual nationality between the UK and Ireland.

I returned home to Scotland today - and this is me now with my new passport! 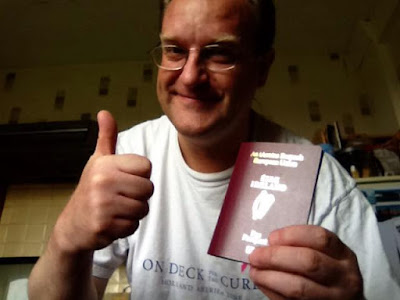 If you too wish to claim an Irish passport, please see the following links for previous posts in this series:

For details on my genealogy guide books, including A Decade of Irish Centenaries: Researching Ireland 1912-1923, Discover Scottish Church Records (2nd edition), Discover Irish Land Records and Down and Out in Scotland: Researching Ancestral Crisis, please visit http://britishgenes.blogspot.co.uk/p/my-books.html.
Posted by Chris Paton at 19:12