The Public Record Office of Northern Ireland (www.nidirect.gov.uk/proni) has uploaded copies of the Deputy Keeper's reports on records management, preservation, collections management and public services for the years 2014-2015 and 2015-2016 - they can be accessed at https://www.communities-ni.gov.uk/publications/proni-deputy-keepers-reports. 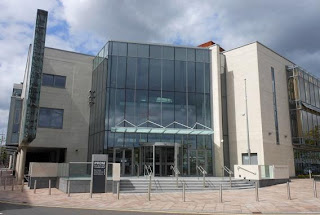 Finally, last week at the Federation of Genealogical Societies conference in Springfield, Illinois, FamilySearch's Chief Genealogy Officer, David Rencher, described PRONI as the "the most genealogically friendly in Ireland". He could not have hit the nail on the head more, though personally speaking I would extend that to say the friendliest in the the British Isles - well done Belfast! :)

(With thanks to the PRONI Express)

For details on my genealogy guide books, including A Decade of Irish Centenaries: Researching Ireland 1912-1923, Discover Scottish Church Records (2nd edition), Discover Irish Land Records and Down and Out in Scotland: Researching Ancestral Crisis, please visit http://britishgenes.blogspot.co.uk/p/my-books.html.
Posted by Chris Paton at 13:20