TheGenealogist has released the records of 29,000 individuals who were decorated with the Meritorious Service Medal (MSM). The roll of names for those who were awarded this British honour in the First World War have been released by TheGenealogist. Researchers can now look for holders of this medal up to 1920 from within their ever growing military records collection. 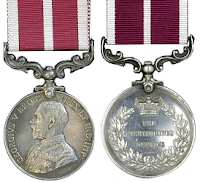 ● Unique “SmartSearch” links to the comprehensive military records on TheGenealogist.co.uk

The medal was first awarded in 1845 to non-commissioned officers in the British Army who had a record of long service in the forces. Given originally
for long service of at least 20 years to servicemen who were of irreproachable character and already held the Long Service and Good Conduct Medal of their service, the First World War saw it awarded to those who performed acts of non-combatant gallantry in the performance of their military duty. In the second case the bravery was not necessarily while the serviceman was on active service and may have been in the saving or attempted saving of the life of an officer or an enlisted soldier.

Family history researchers searching for ancestors who had been awarded the Meritorious Service Medal in the First World War will be able to find their forebears in this new addition to the military collection of records on TheGenealogist.

Read our article on a First World War NCO awarded his medal ‘For exceptionally good work’ operating night and day to keep the RFC’s aeroplanes at El Hammam flying. https://www.thegenealogist.co.uk/featuredarticles/2018/finding-ancestors-awarded-the-meritorious-service-medal-768/

For my genealogy guide books, visit http://britishgenes.blogspot.co.uk/p/my-books.html, whilst details of my research service are at www.ScotlandsGreatestStory.co.uk. Further content is also published daily on The GENES Blog Facebook page at www.facebook.com/BritishGENES.
Posted by Chris Paton at 18:30