PRONI is pleased to announce the launch of our latest digital resource – a digitised register of war casualties who were treated in the Royal Victoria Hospital (RVH), Belfast, between September 1914 and November 1916 (PRONI Reference: HOS/2/1/4/1), and a corresponding names index. The medical service provided by the RVH was paid for directly by the War Office, assessed at a flat daily rate per individual. These records are exceedingly rare, as similar examples were destroyed en masse by UK military authorities after the war.

The register includes details of over 700 soldiers from various regiments who were treated in the RVH during this time. In addition to personal and regimental details, there are also occasional annotations, for example, the register identifies a recipient of the Victoria Cross, Corporal James Pollock VC of the Cameron Highlanders. Pollock was admitted on 4 October 1915 (see page 9) and was awarded the Victoria Cross for his actions at the Battle of Loos in September 1915.

The register was launched today as part of PRONI’s ‘Women and Medicine during the First World War’ conference, marking International Women’s Day later this week. The conference, delivered in partnership with the Royal College of Nursing History of Nursing Network NI and Imperial War Museums, explored the experiences of female medical and nursing personnel working at home and abroad during the First World War.

You can explore the RVH War Casualties Register on the PRONI website: https://www.nidirect.gov.uk/articles/first-world-war-register-royal-victoria-hospital 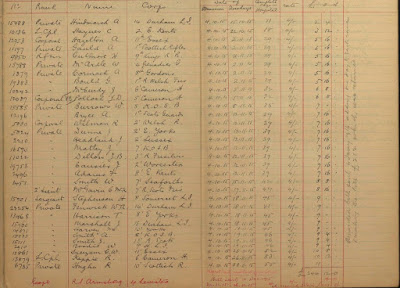 For my genealogy guide books, visit http://britishgenes.blogspot.co.uk/p/my-books.html, whilst details of my research service are at www.ScotlandsGreatestStory.co.uk. Further content is also published daily on The GENES Blog Facebook page at www.facebook.com/BritishGENES.
Posted by Chris Paton at 08:11