It's with a great deal of delight that I received a copy of the latest Pen and Sword family history book in the post yesterday - not only because I was able to make a very small contribution to the author's research, but because the author has given me enough back in return to look at for another decade! Tracing Your Prisoner of War Ancestors - The First World War by the Imperial War Museum's Sarah Paterson is an excellent handbook to help locate POW records for both civilians and the military who were imprisoned in the conflict, within the British Isles, Europe and beyond. 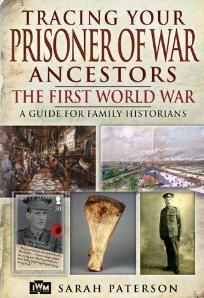 This is an area I have some interest in, in that I run an online project at http://ruhleben.tripod.com about the Ruhleben internment camp in Germany, which housed thousands of British civilian males of fighting age throughout the conflict - including my grandfather's brother John Paton. Ruhleben is an environment that I find absolutely fascinating the more I learn about it, but a question I am often asked about is what exists for other camps. The short answer is that I really haven't much of a clue, as my real interest is simply with Ruhleben for family history based reasons. For this reason Sarah's new book is going to prove to be an absolute Godsend!

There are ten chapters which comprise just over half of the book, with an impressive collection of eight appendices to fill out the rest. Following a general introduction the author starts with a detailed look at the work of the International Committee of the Red Cross, the British Red Cross and the Central Prisoners of War Committee, as well as the Commonwealth War Graves Commission. She then takes us to Germany to first look at the plight and experience of British military POWs, and then British civilians who found themselves caught up in the wrong place at the wrong time. An interesting chapter then takes us to Turkey to look into the story of British prisoners there, before the final three chapters look at the issues of prisoners exchanged in neutral countries and the plight of Germans interned in the UK, both military and civilian.

The appendices then include a general 'quick guide' for resources that can help with POW research and some interesting sections on POW camps in Bulgaria, Turkey, Germany, Austria and East Africa, as well as a detailed list of camps in the UK. These are accompanied by an excellent bibliography and glossary.

Going back to Ruhleben alone, there are many useful resources I am not familiar with which I will now need to pursue, and some details that I was previously unaware of - for example, although there were several sets of magazines and periodicals actually published in the camp, two titles listed here are new to me, being Italian language publications called L'Eco: Foglio Istruttivo Settimanale and Messagero: Foglio Istruttivo Settimanale.

The Pen and Sword family history books range rarely produces anything poor, but I have a feeling this is going to be one of the titles that I will most readily have to hand with my own research. It's given me some new leads to follow, some much needed context on a few fronts - and it is a simply brilliant effort from the author. Thoroughly recommended.

Tracing Your Prisoner of War Ancestors - The First World War is available from www.pen-and-sword.co.uk/Tracing-Your-Prisoner-of-War-Ancestors-The-First-World-War/p/3530/ - the price is currently £11.99 from the publisher (RRP £14.99)

Check out my Scotland's Greatest Story research service www.ScotlandsGreatestStory.co.uk
New book: It's Perthshire 1866 - there's been a murder... www.thehistorypress.co.uk/products/The-Mount-Stewart-Murder.aspx (from June 12th 2012)
Posted by Chris Paton at 18:56