Having just got The Mount Stewart Murder into print, I have a another new book due out imminently, my third publication with Australian based publisher (and all round good eggs!) Unlock the Past. Here's the blurb:

This latest guide from family historian Chris Paton takes a look at the complicated records concerning land and property based research in Scotland. For centuries property transactions within the county were governed by feudal tenure, a system which was abandoned in England and Wales in the Middle Ages, but which continued in Scotland until 2004. But feudalism was not the only method by which land was held, with udalism, dùthchas, leasehold and more competing as forms of tenure across the country at different times.

Connected with the rules surrounding property transactions were those associated with the inheritance of land and heritable estate, all of which is explained in great detail. From sasines to skat, from retours to precepts of clare constant, and from apparent heirs to heirs apparent, this concise guide will help you get to grips with one of the most exciting and useful topics within Scottish family history. 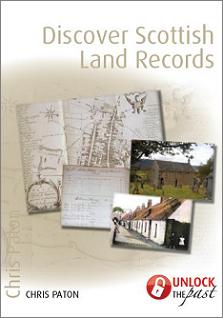 This is a book that started as a talk given down under on two separate visits in the last couple of years, and probably the genealogical handbook I've written which I've had the most fun with. One of my prime motivations for writing books like this is because it really forces me to learn a heck of a lot that I don't know, as well as to share what I do, and I've really learned a lot from this one. As an example, you'll often read about how in Scotland the Services of Heirs procedure was used for the inheritance of land prior to 1868 -  but you don't often read about the formal process involved, or the fact that there were alternatives, or that not all retours were transmitted to Chancery, or what happened if the court decision was later challenged, or how long the court decision was open to challenge after it was retoured in the first place, or why special services list details of land when general services don't, and so on and so on. I've tried to address issues like this in some depth to clarify exactly what was really going on half the time, and so I hope it will really help those looking into their land and property history here in Scotland.

The following are the chapter and sub-chapter headings:

The book is now available for pre-order at www.gould.com.au/Discover-Scottish-Land-Records-p/utp0283.htm and at the price of AU$18 +p&p - it will be published later this month. Check out another land related title also due from the company, Land Research for Family Historians in Australia and New Zealand by Carole Riley, also available for pre-order from www.gould.com.au/Land-Research-for-Family-Historians-in-Aus-NZ-p/utp0162.htm.

Check out my Scotland's Greatest Story research service www.ScotlandsGreatestStory.co.uk
New book: It's Perthshire 1866 - there's been a murder... www.thehistorypress.co.uk/products/The-Mount-Stewart-Murder.aspx (from June 12th 2012)
Posted by Chris Paton at 11:48