Discover my Past Scotland collection offer 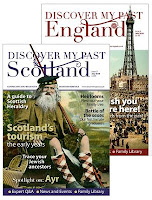 At the end of last year and the beginning of this year, Brightsolid cancelled two online family history magazines that it had been publishing for three years. Discover my Past Scotland ran for 39 issues, whilst its younger sibling, Discover my Past England, ran for 24 editions.

With the exception of the first two issues of the Scottish title, I had the pleasure to write the monthly news and book reviews columns for both titles for the duration of their run, and contributed many articles on all sorts of subjects, as did other genies based in both countries, working to editor Hilary Bowman.

The titles have both been cancelled, but the magazines themselves can still be purchased online at www.discovermypast.co.uk. Although the site is apparently offering Discover my Past England at "a special rate" of £2.50 per issue - so special that it was actually sold at that exact rate when it was in production! - there is a more genuine offer for back issues of Discover my Past Scotland, in that you can now download all 39 issues in PDF format for a fee of just £15 in total (instead of the £97.50 that the 39 issues previously cost at £2.50 each).

Those of us who worked on the title - both titles - were very proud of what we achieved, and there's some great stuff in each edition. Discover my Past Scotland was the first UK based online genealogy magazine, perhaps just a little too ahead of its time when launched at a time when tablet computers had yet to catch on in Britain. Its articles still stand up to this day, so if you fancy a wee treat, Scotland's only ever monthly genealogy magazine awaits in a wee bundle for just a few quid!