I'm back in good auld Alba after a fairly exhausting few days down south at the Who Do You Think You Are Live event in London. I have previously blogged about the first two days of the event at http://britishgenes.blogspot.co.uk/2013/02/who-do-you-think-you-are-live-2013-2.html - here's the final instalment! 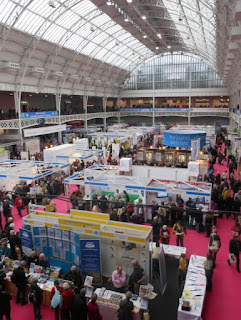 The two talks that I gave on Friday and Saturday, concerning Scottish marriage and online Irish resources were both sell outs, and thankfully went down well - I like to do talks on serious subjects, but not necessarily in a serious way! Sunday, however, was a much quieter affair, with just a book signing to do for my Irish book, which sold out by 11am. Thanks to all those who purchased a copy - I've had a lot of great feedback so far, and the book will be formally published in April. If you pre-order a copy it will be sent out to you at the start of the month, I've been told, despite the website stating April 30th as the official publishing date (all Pen and Sword Books have the 30th as a date of publishing apparently, but it is only a rough estimate). 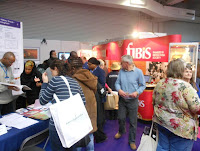 The show itself was considerably quieter on Sunday, taking the event back to the same sort of pattern as experienced in most years (with last year being something of an exception). I was able to meet and greet a few more of the vendors, and thankfully discovered some useful releases. Here's a quick run down...

In my previous post I mentioned that there seemed to be no major launches on the records front, other than FindmyPast's new court records, but in fact the vendor really going to town with new material was The Genealogist (www.thegenealogist.co.uk) with several new collections. The site has just released 150,000 Naturalisation and Denization Records covering the period from 1609-1960 - these break down to 145,000 naturalisation records and 5000 Huguenot records. They show when foreigners formally became British citizens (by an Act of Parliament prior to 1844) and include details of any name changes that may have been undertaken by the applicant. The site also has a new War Memorials section, with well over 100,000 names, based on a project from Mark Herber, which allows you to search by name, find the war memorial, a photograph of the name on it (including a nifty Google Street View link at the cemetery itself), and with links to the Commonwealth War Graves Commission website and more - this is a project that will continue to develop and grow. A third collection launched was that listing First World War casualties, both wounded and killed (from published War Office Weekly Casualty List returns), another major useful resource. I'll bring you more on these when I get the formal press releases, but I have had a play with the latter in particular, and it is brilliant.

I've finally joined the North of Ireland Family History Society (www.nifhs.org), which now has a new library facility in Newtonabbey in County Antrim, near the Abbey Centre - the Newtonabbey branch itself also now has a new Facebook page available at www.facebook.com/NewtownabbeyFHS. The main group itself has now published its first in a series of guides on Ulster, entitled "Researching Your Ancestors in the North of Ireland: County Monaghan". It's a handy wee guide with detailed breakdowns of the existence of parish records, microfilm numbers and location, and coverage, as well as for other records - well worth obtaining.

On the Scottish front, I caught up with Dee Williams of ScotlandsPeople (www.scotlandspeople.gov.uk), and the next item up soon for release is the 1895 Valuation Roll for Scotland. Attention is also once again being turned to getting the long promised and already digitised kirk session records online, though discussions on exactly where and how that will be made available are ongoing - Scottish soldiers wills from the First World War is another project on the cards. I also caught up with the Deceased Online team (www.deceasedonline.com), and there are more records coming soon, with more material for Aberdeenshire (I had not realised the whole county was not yet online), and for one other authority in the Highlands in the near future - more on that in due course.

I've been asked to plug a couple of events and releases, which I will do via separate posts in the near future. 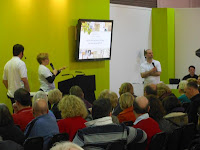 Overall, this year was a busier event, with fewer vendors in attendance, notably on the southern Irish and military areas, meaning stalls were slightly further apart this year, making it much easier to get about! The same energy was there as usual, and lots of people left as very happy bunnies. I look forward to the next event in 2014! A big thank you to Bob and Liz Blatchford, with whom I worked on the Family and Local History Handbook stall - very shortly I will be running two competitions on this blog, the prizes for the first being copies of both the new Irish and UK handbooks, and the prize for the other being my very own new book on Irish research online. Stay tuned!

Finally, just to show that it truly is the case that eventually the law gets us all - geneablogging can be a dangerous game at times....!

Pre-order my new book, Tracing Your Irish Family History on the Internet, through Pen and Sword (30 April 2013), or purchase early at Who Do You Think You Are Live 2013 in London. For my other genealogy books, please visit  http://britishgenes.blogspot.co.uk/p/my-books.html; whilst for my online Scottish based genealogy courses please visit the Pharos Teaching and Tutoring Ltd site.
Posted by Chris Paton at 12:42

Email ThisBlogThis!Share to TwitterShare to FacebookShare to Pinterest
Labels: wdytyalive