The first of three press releases from The Genealogist (www.thegenealogist.co.uk): 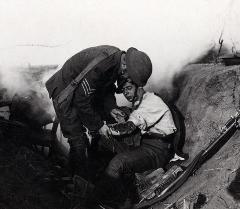 According to War Office statistics, the First World War claimed the lives of over 700,000 British soldiers. 170,000 were captured as prisoners of war and a staggering 1.6 million soldiers were injured. Now with the new collection of Casualty Lists, you can see the names behind the figures!

This unique resource is available as a fully searchable database for the first time.

TheGenealogist is launching at ‘WDYTYA Live’ a major new military collection to help you find more out about your ancestors that fought in The Great War. The collection is a list of soldiers of all ranks who were reported as injured, missing or prisoners of war by The War Office.

The coverage at launch covers the War Office’s ‘Weekly Casualty Lists’ from 1917-18 and this will be expanded by the daily casualty lists to cover from September 1914 to the last reports of 1919, as reports were still being published well after the war had officially ceased.

There are over 600,000 records available at launch which will grow to cover the entirety of World War One. From the first records of British losses through to early 1919, there’s more information than ever for family historians to access, to find out what their ancestors did in the Great War. With casualty lists listing all ranks from war office published lists, rolls of honour and other reports of the time, it’s all on TheGenealogist.

Using the sophisticated search features, it’s now possible to just add the basic details and go straight to a record of your ancestor if they were wounded or classed as missing in the Great War.

(With thanks to David Osborne)

Pre-order my new book, Tracing Your Irish Family History on the Internet, through Pen and Sword (30 April 2013), or purchase early at Who Do You Think You Are Live 2013 in London. For my other genealogy books, please visit  http://britishgenes.blogspot.co.uk/p/my-books.html; whilst for my online Scottish based genealogy courses please visit the Pharos Teaching and Tutoring Ltd site.
Posted by Chris Paton at 14:51