Dictionary of the Scots Language revamp

I noticed earlier today that the Dictionary of the Scots Language (Dictionar o the Scots Leid) website has recently had a revamp at www.dsl.ac.uk. 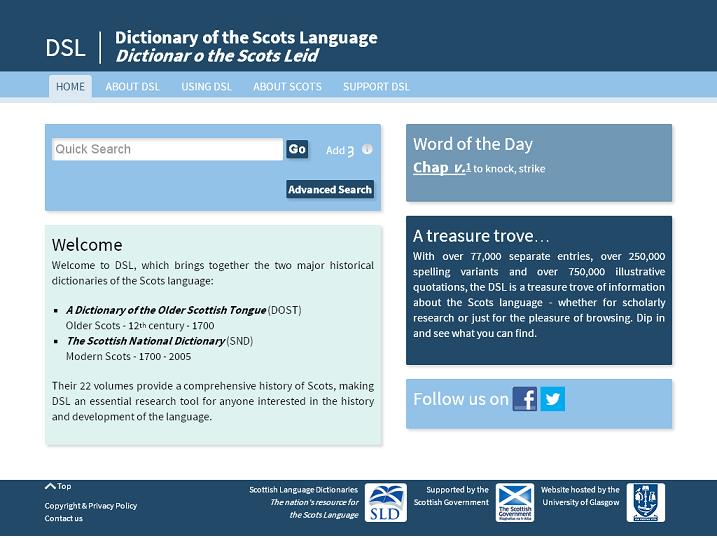 The site is one of the real workhorses of Scottish history research, allowing you in a single database to look up Scots words from two sources - the Dictionary of the Older Scottish Tongue, for words from the 12th century-1700 (Older Scots), and The Scottish National Dictionary for more recent vocabulary (Modern Scots) from 1700-2005. The Scots tongue, although related to English, is a historically separate Germanic language with many regional dialects across Scotland (and closely linked historically with Northumbrian dialects in England), and which was also taken over to Ireland in the Plantations, where its local variant today is known as 'Ulster Scots' or 'Ullans' (Ulster Lallans). In the part of East Antrim where I was raised I was regularly chastised as a boy for being a wee hallion! It is a completely different language to the various tongues of Gaelic found in Scotland, Ireland and the Isle of Man.

Earlier today I had a query from a student asking what the words 'dyet' and 'compear' mean, two very common words often found in kirk session records and other documentary sources. A 'dyet' or 'diet' is a session of a court, whilst 'to compear' means 'to appear in court as a party to a cause' i.e. as a witness. The DSL is the first port of call in such situations, and is completely free to access. You'll also find a history of the language on the site, well worth a read.

One of my all time favourite finds in this dictionary was an explanation for the word 'football' which kept popping up in some 18th century weaver's incorporation records from Perth that I was transcribing. Several entries noted those wishing to join the incorporation being asked to pay both for their entry money and their 'football'. I had no idea why Perth was so apparently sport conscious, but it soon turned out that they weren't. A football was in fact 'a sum of money paid by a married entrant member of a merchant guild on behalf of his wife to allow her to share in the benefits of the common fund'.

If you're pre-1855 with your research and now heading deeper into the juicy Scottish stuff, make sure you bookmark the DSL!"

Stuck for a Christmas gift?! I have a series of genealogy books available in the UK, Australia and Canada, on Scottish, Irish and British based subject areas. Further details at http://britishgenes.blogspot.co.uk/p/my-books.html. Santa approves!
Posted by Chris Paton at 21:22