I've been asked to share the following news of a new publication from Lanarkshire Family History Society (www.lanarkshirefhs.org.uk):

Lanarkshire Family History Society has published a book commemorating the men of Hamilton who died in World War One, including those born in the town, or who enlisted or lived there. 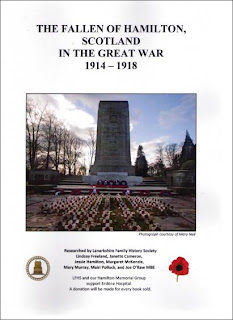 Researched and compiled by a team of volunteers led by Society member Lindsay Freeland, the book carries information on almost twelve hundred men. Initially, less than 500 had been identified on local war memorials, but over two and a half years of research and writing, the team found more and more names - many of them recorded on lesser-known memorials in churches, schools or Masonic lodges, on rolls of honour, in newspaper articles and cemetery records.

The men came from a variety of backgrounds, and served in what must be virtually every branch of the armed services of the Great War. They joined Scottish, English, Irish and Welsh regiments, as well as forces from other countries of the British Empire. Others served in the air and at sea, and many were in service regiments like the Machine Gun Corps, Military Railway and Royal Artillery. There was even a Hamilton man in the South Persia Rifles Brigade.

The entry for each man carries as much information as could be found, usually including regiment and service number; date and circumstances of death; place (and sometimes date) of birth, along with names of parents or other family members and where buried or commemorated, both locally and in the battlefields of Europe or elsewhere. There are some photographs, and – where available – information about the man’s education and occupation prior to enlisting.

The book contains poignant stories of sacrifice, including the three Clark brothers, Allan, John and Robert, army officers killed in the final two years of the War. The sons of the Chief Constable of Hamilton and his wife, all had either graduated from or were studying at Glasgow University. John and Robert died in France, while Allan was killed fighting Bulgarian forces in Greece. Former miner, Lance Corporal James Russell, died in a Barrack Hospital in Freiburg, Germany, while a prisoner of war. 2nd Lieutenant Andrew Robertson Dick was killed in action in the Ypres Salient, Belgium in July 1918, almost exactly two years after his brother, Private William Dick, was killed on the first day of the Battle of the Somme. And Captain John Pettigrew, the son of a Hamilton blacksmith, was attached to the South Persia Rifles. He died at Shiraz, Persia (now Iran) in the final month of the war, and was buried in Tehran War Cemetery.

“The Fallen of Hamilton, Scotland in the Great War 1914-1918” is priced at £10, plus P&P, and a donation will be made to the Erskine charity for each copy sold. It is available to buy on the Lanarkshire Family History Society website www.lanarkshirefhs.org.uk in the Publications section.

(With thanks to Liz Irving)

Stuck for a Christmas gift?! I have a series of genealogy books available in the UK, Australia and Canada, on Scottish, Irish and British based subject areas. Further details at http://britishgenes.blogspot.co.uk/p/my-books.html. Santa approves!
Posted by Chris Paton at 11:44