The following article was first published on 2 AUG 2013 on my other blog, Genealogy: Walking in Eternity (www.walkingineternity.blogspot.co.uk), where it has by far been the most popular post of all time since that blog was first started in 2010. It is here reproduced and updated to reflect more recent developments. Enjoy!

In 1908 the Old Age Pension Act was introduced into the United Kingdom, providing a pension for the first time to those aged over 70 years of age. The key thing for any applicant before being able to make an application was to prove they were the right age. In England and Wales - no problem, civil registration was implemented in 1837. In Scotland, civil registration was implemented in 1855, so a few folk unable to find birth records did need to find proof of age from other sources - it was for this reason that the 1841 and 1851 Scottish censuses were returned from Westminster to Scotland in 1910.

In Ireland, where civil registration of births did not commence until 1864, the censuses and the parish records also became essential tools to help prove age. A tragedy in Irish genealogy is that the censuses were later destroyed, but the information extracted by pension claimants from the documents has survived, and can be extremely useful if consulted. Some information is online - but the online material, whilst incredibly helpful, is incomplete, and can even be misleading if not understood in context. 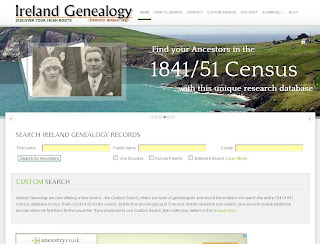 Last year I discovered that an application for my three times great grandfather Arthur Taylor in Belfast existed. I had sourced an index entry for it from the excellent Ireland Genealogy website at www.ireland-genealogy.com, which charges £2 for a look up. (It's important to note that additional material is also available on Ancestry, in two collections called 1841/1851 Census Abstracts, one for Northern Ireland, the other for the Republic, so do check both). The following details were noted for Arthur in the return.

The first two details were a 'Source Film ID' and an 'Ireland Gen ID'. The index was obviously created from a microfilm or fiche, and the entry given a new number by the Ireland Genealogy folk. His name was then given as Arthur TAYLOR, and his parents as Arthur TAYLOR and Bella HALL. His place of residence was the townland of Belfast, in the parish of Shankhill, but nothing was listed beside the field marked 'Barony'. The age of the applicant was noted as 69-70. The following fields then appeared as follows

The first thing to note here is that an application exists - brilliant, well worth £2 alone to find that out! When an applicant required proof of age, he or she could ask the Public Record Office of Ireland, as it was back then in Dublin, to check the 1841 or 1851 censuses, on the basis of information supplied by the applicant, to see if he or she could be found. My initial interpretation of the above therefore was that Arthur was found in the 1851 census - brilliant again! - and that there was also an Ann Taylor present. I wondered if this might be a sister? The marriage date had a question mark, but did not match what I knew so far, so equally raised a question mark with me. The other deduction I made was that if Arthur was 69-70, he must have made his application in about 1917 or 1918, as I knew he was born in 1848.  However, with question marks on Ann, and the stated date of marriage, I decided to look up the original record in Belfast on a visit to PRONI. It was then that I discovered that not everything was quite as it seemed...!

The original pension application books for Belfast, and indeed Northern Ireland, are held at PRONI, but not as microfilmed copies, which I had assumed, but the original "O.A.P. 37" schedule forms. The first discovery I made therefore was that the Source Film ID reference on the Ireland Genealogy site apparently had no relevance to PRONI's holdings at all. Instead, I had to look up a series of microfiche indexes held in the archive's self-service area, and once Arthur's name was found, to then note a Volume and Page number. The next thing I apparently needed to know was the barony in which Arthur had lived - the one detail of course not provided in the transcript! But as it was Belfast, one of the archivists suggested ordering up two books using the PRONI catalogue, one for Belfast, the other a sort of mopping up collection of miscellaneous entries from Belfast and Carrickfergus.

Within 15 minutes I had the two books. The first thing I noticed, however, was that the pages in the books were not numbered, only the applications. The detail for Arthur Taylor noted his application was in Volume 3 and Page 324 - but there were only 315 applications in the book. There was also no index in the book, nothing to try to work out how to convert the microfiche reference to what was before me. Within the next 15 minutes, I had had a few conversations with some of the staff, and it was soon realised that the page number reference was actually irrelevant (one of the staff remembered this being discovered some time back). There was only one thing for it then - I started at the front, and slowly worked my way through, one application at a time... In fact, I was extremely lucky. Arthur's application was number 14, out of 315. The information I found, however, was not quite as expected, and much more detailed.

The following initial details were provided for the search:

"Fam not found"?!!! Woah, lots going on! Arthur had asked the officer to look up his family in the 1851 census, believing he had been resident at Abbey Street, near Peter's Hill in Belfast. But far from being found, the officer noted that he had not been. So what can be deduced from this? Arthur was aged three in 1851. He perhaps believed that he had been there when the census was taken, when he hadn't - but it almost certainly suggests that at some point around that time his family was resident there. The entry further notes that two census volumes had been consulted, numbers 241 and 307 - sadly now non-existent.

But that wasn't the end of it. Arthur had also mentioned that in his childhood at some point he had "lived with grandfather, also Arthur Taylor". Yes!!! As a working theory I was fairly sure that his grandfather was also an Arthur Taylor, but this was now the proof. But grandfather Arthur was also listed for a reason - the officer was advised subsequently to "Try McLelland’s Entry or Lime Street", and then in pencil was added in brackets "Try McLellands Lane or McLellands Entry". Noted beside this was the following - "Found Arthur and Ann Taylor married 1819, no trace of claimant". So my three times great grandfather Arthur Taylor was still missing - but because he was so hard to find, I now know that my five times great grandparents were found, in volume 295, and not only that, but were married in 1819 (the loss of the Irish censuses is all the more tragic in that these questions were asked, unlike their equivalents in Britain). This was also the first time I had found the first name of my five times great grandmother, Ann (assuming this wasn't a second wife!)!

Finally, one last detail - the Deputy Keeper of Public Record Office of Ireland made his reply to the pension office on 3 MAY 1918, confirming that the application was indeed in early 1918. My three times great grandfather Arthur Taylor, far from being found, as had been suggested in the online index, in fact never was (at least on this attempt). The entry does note two other application numbers in the margin, 1738 and 3190, in red, but I have no way to check if these were follow up applications, or perhaps entries relating to relatives who later applied and were found, with the detail perhaps cross-referred to Arthur? Who knows?

What the above shows is many things.

a) Some pre-1911 census information has survived - Irish genealogy is not all gloom and doom! You just need to be a bit more creative in establishing options.
b) Online indexes need to be understood as a starting point - but always follow up with consulting the original.
c) Published indexes on microfiche can be equally as bad as anything you will find online!

There were issues with both Ireland Genealogy indexes and the PRONI microfiche - neither provided enough detail to get me to the original entry on their own. At the same time, however, the above research would not have been possible without them, despite the issues raised. And thanks to them, I now know even more about a branch of my family that goes back to the late 1700s in Belfast at least!

UPDATE: What this article dealt with when originally published last year were the pension application books held at PRONI in Belfast (www.proni.gov.uk). Many additional records for the north, however, are also included in the pension application records as held at the National Archives of Ireland. These records in Dublin have since been digitised and are now freely accessible at http://censussearchforms.nationalarchives.ie/search/cs/home.jsp. Bear in mind also that sometimes letters to local ministers asking for proof of age may be found on some church records microfilms - for a list of those records available at PRONI visit www.proni.gov.uk/guide_to_church_records.pdf.

Not only that, but some additional surviving census fragments from 1821-1851 have also been digitised and made freely available at www.census.nationalarchives.ie - particularly useful for Co. Londonderry in 1831 and much of Co. Antrim in 1851.

If you are just starting out with your family history research, my book, Tracing Your Irish Family History on the Internet, should help you to locate many of the key resources to help you get under way - not least of which some of the resources digitised and made available online by bodies such as PRONI, the National Archives of Ireland, the National Archives at Kew, and more.

The book is available from publisher Pen and Sword in paperback, Kindle and ebook editions. For a free 13 page preview - and to order a copy - visit www.pen-and-sword.co.uk/Tracing-Your-Irish-History-on-the-Internet/p/3889/.

My next Scotland 1750-1850: Beyond the Old Parish Records online course starts on November 5th, and runs for 5 weeks, priced at £45.99. Spaces are still available - see http://pharostutors.com/coursedescriptions.php#302
Posted by Chris Paton at 20:02