The Casualty lists are an excellent resource to use when researching a soldier who fought in the Great War 1914-18. 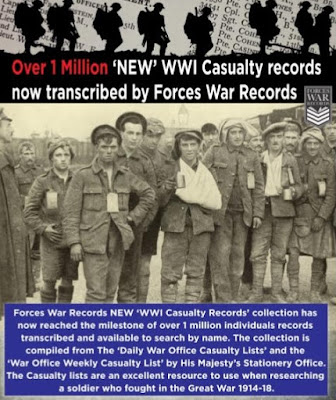 At the start of the First World War, it was decided to publish casualty list for soldiers who were reported killed, died of wounds or accident, been declared as missing, wounded or admitted to hospital with shell-shock. The ‘Daily War Office Casualty Lists’

were first published on 1st September 1914 and printed within various newspapers such as The Times, Daily Telegraph, The Irish Times and The Scotsman until August 1917. In August, it was decided that newspapers would no longer be able to print the casualty list in full due to the shortage of paper and the effect of morale on the public seeing the great number of casualties daily. Instead, the Daily Casualty List were published as the ‘Weekly Casualty List’ by His Majesty’s Stationary Office. Forces War Records has now transcribed all the records published within The Daily Telegraph Newspaper and we are very proud to be working with the National Library of Scotland to transcribe their original collection of the ‘Weekly Casualty List by His Majesty’s Stationary Office’. These records are of enormous value to researchers, for in many cases the information that a man appeared in a list will not be available elsewhere. Researchers should note that the appearance of a name on the list was some time after the man became a casualty – usually around a month or so. Armed with this information and the War Diary of the man’s unit, the circumstances in which he became a casualty can be researched. Also, you can use the exclusive Forces War Records ‘WWI Troop Movements and ORBATS’ interactive map to follow your ancestor's footsteps while listening to the in-depth and highly detailed commentary.

During the First World War the British war effort required an incredible amount of manpower – with over 8,500,000 million serving at some point during the conflict – and whilst this figure is inflated by colonial contributions – numerically it means almost a fifth of the UK population served. The official Medical Services statistics report 2,272,998 men wounded so there was little over a 1 in 3 chance that a man was wounded! (Although the 2 million does include men who were injured multiple times so that statistic will be misleading).

The proportion of the country serving meant that everyone will have known several people fighting, and due to the great numbers of casualties often the quickest to find out the fate of friends, or family was to read these daily lists. This led to several national newspapers, including the Times and the Daily Telegraph publishing the lists as well as many local papers. Given the fate of many of the First World War Service records, this will be the only surviving record for many of these men. Furthermore, if a man was listed as wounded in this record then you can infer that he was eligible to wear a wound stripe on his uniform.

The collection available on Force War Records is likely to include the following:

* Place of Enlistment (given as Resided Town)

Please be aware that due to the way we collate and cross-reference our databases, some records will contain more information than that listed above.

N.B. Soldiers who were killed are to be found in the ‘Soldiers Died in the Great War 1914-1919’ collection and not within this new collection.

For my genealogy guide books, visit http://britishgenes.blogspot.co.uk/p/my-books.html, whilst details of my research service are at www.ScotlandsGreatestStory.co.uk. Further content is also published daily on The GENES Blog Facebook page at www.facebook.com/BritishGENES.
Posted by Chris Paton at 18:57