On Friday 1 June 2018 I attended the latest Public Record Office of Northern Ireland (www.nidirect.gov.uk/proni) user forum meeting in Belfast. Upon arrival I was greeted by Stephen Scarth, who handed me a copy of the new Plantations of Ulster, 1640-41: A Collection of Documents guide, which has been reprinted and updated, and which I will review separately – suffice to say, the smile on Stephen's face and on everyone else who received a copy was well warranted! 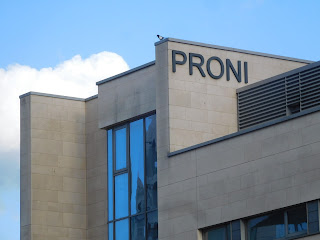 The meeting started with a demonstration of PRONI's contribution to the Conflict Archive on the Internet (CAIN) web platform. This is a platform which has been up and running for a few years now, and which is essentially an official record of The Troubles, with documents from governments north and south, and in England, concerning the last 40 years. Access to PRONI's contributed records is available through the CAIN archive's website at http://cain.ulst.ac.uk/proni/index.html. On 10 MAY 2018, some 500 document records from 1988-89 and earlier were added, some 2200 pages of content, following the latest 20 year release of government papers, covering politics, security, the economy, Harland and Wolfe, the Irish language, education, social issues, health, and much more, including the talks at the time about ending the conflict. The archive presents the records in thematic areas or by annual listings (though not chronologically within a year), and contains a fascinating insight into our Troubled society at the time. There was some very Sir Humphrey type language in parts, with phrases such as 'spotting icebergs' used in one document to mean unexpected items coming their way, etc!

Another topic discussed was one that might be of interest to Northern Irish folk who experienced life in the Troubles, the possible establishment of an oral history archive, as posited in the 2014 Stormont agreement. Such an archive will need to be established by legislation, and so a consultation is currently under way, which closes on 10 SEP 2018. The consultation is online at https://www.gov.uk/government/consultations/addressing-the-legacy-of-northern-irelands-past.

We then had an update on recent acquisitions. These include papers relating to PACE (Protestant and Catholic Endeavour) from 1992-2018, a single volume from 1919 containing an inventory of household goods belonging to Robert Young (of Young and Mackenzie architects), and 121 diaries of a Major Henry John Furnace Potter covering 1941-2000 – though sadly, most of us who were in the room will never likely see them, as they have a 50 year closure on them, as requested by the family.

On cataloguing, the Londonderry Papers have had more work on them including records relating to the Women's Legion from the 1930s and 1940s, and Mount Stewart estate papers from 1933-35. PRONI's efforts to digitise recently borrowed Anglican and Methodist records has now been completed for this year – for more on this, and a summary of all digitised records that can be accessed on site at PRONI (including those added last year), see http://britishgenes.blogspot.com/2018/06/new-digitised-northern-irish-church.html. The records will be available through PRONI's on site catalogue from autumn.

On the exhibitions front, Northern Lights: A Century of Design by Young and Mackenzie Architects kicks off on 7 June, with a lecture on site at 1pm by Paul Harron, and after finishing a stint in PRONI the exhibition will then travel across Northern Ireland. There will also be a Spanish Flu conference at PRONI at 2pm on 14 June 2018.

The big event for this year will be the Voices and Votes: Suffrage and Representation of the People 1832-1928 exhibition, commemorating the 1918 Representation of the People Act centenary which extended the vote to women for the first time. We had a sneak peak at parts of the exhibition, which launches on 2 July 2018, and which will look at the legislation, who championed the change, the early experience of women, suffragists and suffragettes, women, class and war, reform, equality, and much more. The exhibition panels will also include QR (Quick Response) codes for attendees to engage with on their mobile devices, lining to other websites and more. In addition, an exciting addition to the Spatial NI website will see an interactive map with links to documents and stories at various locations across Northern Ireland linked to the fight for the vote. There will also be a graphic novel launched to illustrate the stories of Lady Edith Londonderry and Countess Markiewicz, which will tie in to the key stage 3 of the Northern Irish schools curriculum. There will be a few other events and releases tied into the exhibition, so keep an eye on the PRONI website for more details!

A further exhibition in the works is one on prisons in Northern Ireland, from bridewells to the present day, mostly dealing with the late 19th and early 20th century.

On publications, as well as the new Plantations of Ulster, 1640-41: A Collection of Documents reproduction, PRONI is currently working on a re-invention of its former Steps to Partition facsimile pack, for release in September. The exact format of this is still being worked on, but there may be two versions, one for school use, and one in more depth for a more general release.

Finally from the meeting, PRONI is still working on being Northern Ireland's first accredited archive, and made its submission in March, with assessors visiting the archive in May. Good luck to the archive, the best in the UK as far as I'm concerned!

After finishing the meeting, I made my way to the search room, and kept bumping into folk, including Michael Rooney from Ancestor Network, and a couple called Alex and Nancy who heard me give a talk in Toronto three years ago, and who are active members of the Toronto branch of the Ontario Genealogical Society. Requisite selfies were duly acquired...! 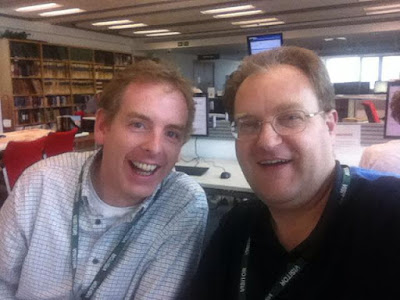 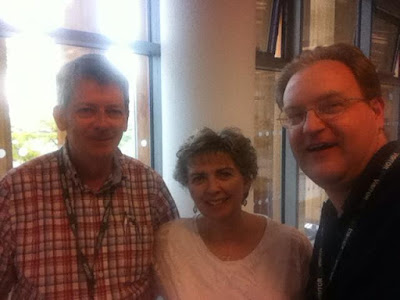 For my genealogy guide books, visit http://britishgenes.blogspot.co.uk/p/my-books.html, whilst details of my research service are at www.ScotlandsGreatestStory.co.uk. Further content is also published daily on The GENES Blog Facebook page at www.facebook.com/BritishGENES.
Posted by Chris Paton at 18:01