Review: Plantations in Ulster, 1600-41 – A Collection of Documents 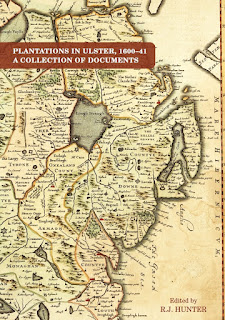 This guide, originally published by R. J. Hunter, but now expanded and updated with additional material by Ian Montgomery of the Public Record Office of Northern Ireland and Dr. William Roulston of the Ulster Historical Foundation, is quite simply a breathtakingly beautiful book - not just because it is a visual treat, with its many wonderfully captured full colour images of documents from the Plantation period and easy to access transcriptions, and not just because it only costs a penny! But because, as with any good resource book, it unlocks an entire new world of potential in terms of documentary sources to pursue, and research approaches to take.

Almost twenty years ago I wondered if I would ever be able to connect back to the resources of Griffith's Valuation in the mid-19th century; now I am at the stage where I am beginning to touch the Plantations of Ulster era on many of my Northern Irish lines. What this book does is to completely bring that era to life, telling the story of the Plantations, the frustrations of the Plantations, the failure of parts of the Plantations scheme, and also some of the successes of the Plantations, by providing an insight into the Plantations as a project and scheme which was actually carried out. This was not just a chapter heading in a book, this actually happened as an event, and had many real experiences at its heart – for good and for bad – which are to this day still vilified as controversial by some, and commemorated as an achievement by others.

The Plantations scheme as envisaged in London is described through a series of contemporary documents marking progress along the way, including its inception, its revisions and its impact. There are examples of surveys of the lands in Ulster to be planted with Protestant settlers from Britain, reports on the native Irish experience in Armagh from 1624, examples of port books, the Charter of Belfast, a photograph of the memorial stone to Arthur Chichester in my home town of Carrickfergus, petitions, maps, and the list goes on.

A third of the documents featured are new additions extending the late Bob Hunter's original work, with the new version of the book produced in association with the R. J. Hunter Committee. Some of these previously unpublished documents were actually worked on by Bob Hunter himself, whilst Ian Montgomery and William Roulston completed the additions.

The book costs just a penny, but you will need to pay for postage and packing – details on how to do so are available at http://www.booksireland.org.uk/store/all-departments/plantations-in-ulster-documents.

This may well become one of my all time favourite Irish genealogy books, because I now believe that whilst I may have made a lot of progress on my Irish research in twenty years, it's just reminded me I am still a novice with a hell of long way to go!

(With thanks to PRONI and the Ulster Historical Foundation)

For my genealogy guide books, visit http://britishgenes.blogspot.co.uk/p/my-books.html, whilst details of my research service are at www.ScotlandsGreatestStory.co.uk. Further content is also published daily on The GENES Blog Facebook page at www.facebook.com/BritishGENES.
Posted by Chris Paton at 18:54