TheGenealogist adds to its 1921 census substitute 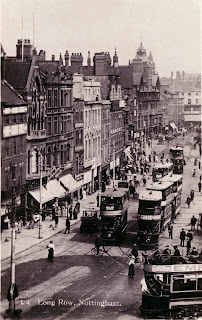 With the 1921 census still some years away from public release, TheGenealogist has added to its 1921 census substitute. This resource covers a large number of county directories which have been transcribed to produce a searchable resource. This appears under Census Records as the 1921 Census Substitute on TheGenealogist and they encompass a period currently not served by a published census. With this release the total records are boosted to 1.75 million heads of household.

* search on forename, surname and profession

* search by street, town and county

* look for a business name

These 1921 directories cover Nottingham, Glasgow, Leicestershire & Rutland, Derby, Shropshire, Kent and add to those already released for Aberdeen, Bath, Berkshire, Bradford and Surrounding Districts, Bristol and Suburbs, Brixton and Clapham, Buckinghamshire, Cambridgeshire, Channel Islands, Cheshire, Cumberland, Dorset, Durham, Hessle, Hull, Lincolnshire, London, London County Suburbs, Middlesbrough, Norfolk, Northumberland, Oxfordshire, Somerset, Suffolk, Westmorland, Wiltshire, Worcestershire and Yorkshire. If you have ancestors that you are tracing in the 1920s then this new release from TheGenealogist adds a fantastic name rich resource for you to use.

At a time when we are celebrating the 100 years of women getting the vote we have used this newly released records to find some people with suffragette connections.

For my genealogy guide books, visit http://britishgenes.blogspot.co.uk/p/my-books.html, whilst details of my research service are at www.ScotlandsGreatestStory.co.uk. Further content is also published daily on The GENES Blog Facebook page at www.facebook.com/BritishGENES.
Posted by Chris Paton at 18:16