A quick post here to mention a film that I saw recently when down under, which I mean to mention in my blog post on the trip. Whilst at sea we had a nightly cinema on the go, and on one particular evening my wife and I went to see a film called Oranges and Sunshine. We had no idea what the film was about - it was billed as being about a social work scandal in Nottingham by the ship's entertainment team, and as we had nothing better to do we decided to kill a couple of hours watching it. 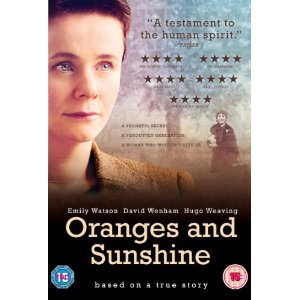 In fact, Oranges and Sunshine turned out to be one of the most powerful films I have seen in recent years. The social work scandal was something just a little bigger than expected - the story of Margaret Humphreys uncovering the British Government's home children scheme, to deport children to Australia, New Zealand, Canada and other dominions around the world, and to bring it to the public's attention. Her efforts led to the formation of the Child Migrants Trust (www.childmigrantstrust.com), and eventually to an apology by the former Prime Minister, Gordon Brown, in February 2010, who apologised on behalf of the British Government for the scheme which was first implemented in Victorian Britain and continued until 1939. It's a fairly grim watch at times, but ultimately uplifting.

You may have already seen it, but if not, the DVD is available from Amazon for less than a fiver - if you haven't seen it I would thoroughly recommend it. Definitely one every genie should see...