For the last three weeks I have been travelling around New Zealand and Australia, as part of a genealogy cruise and talks tour organised by Unlock the Past (www.unlockthepast.com.au). I managed to make one quick update on our progress whilst at sea (see http://britishgenes.blogspot.com/2011/11/cruise-progress-first-report.html), but internet access after that was difficult, hence why I'm only getting around to posting this final summary of events now. Here's a quick video to set the scene, depicting a Maori performance of the Haka at the Auckland War Memorial Museum!:

The theme of the cruise was based around Scottish and Irish family history research, definitely the territory of this Northern Irish Caledonian based Paddy, so I was delighted to be invited along! Also part of the talks team were Shauna Hicks, Richard Reid, Keith Johnson, Perry McIntyre, Jan Gow, Helen Smith and Rosemary Kopittke, and I think it is safe to say the thematic territory was safely covered, with many fascinating topics. In addition to talks on board the Volendam, a series of talks were given on shore at each of the stops – Auckland, Tauranga, Napier, Picton, Wellington, Dunedin, Burnie (Tasmania), Melbourne and Sydney. In total I gave twenty eight presentations, eleven separate topics on board ship, and the rest on shore (mainly the Discover Scottish Church Records and Irish Family History Online topics, for which I have written two Unlock the Past published tie-in books). For a brief video snippet of one, see http://www.youtube.com/watch?v=nYYfmPRe9Xs.

The whole tour started and ended with day long sessions in Auckland and Sydney, where Rosemary and I were the keynote speakers, but I want to give a special shout also to Brad Manera, who gave the talk that most enthralled me throughout the whole event. On the last day of the tour, Brad described the story of the Japanese submarine attack in Sydney in June 1942, a story I had never heard of, and one which fascinated me, my own father having been a submariner. Brad also spoke on the bombing of Darwin by the Japanese, again reinforcing that I know absolutely nothing of the Australian story of the Second World War – something I seriously plan to rectify. Incidentally, Unlock the Past is hosting a major event in Darwin next February entitled War Comes to Australia – further details can be found at www.unlockthepast.com.au/events/war-comes-australia-wwii.

Throughout the trip I had a chance to talk to both the other speakers and many of those who had signed up for the cruise. I also managed to visit many wonderful locations, including a tour of the last convict ship down under, the Edwin Fox, in Picton (see my video diary at http://britishgenes.blogspot.com/2011/12/last-convict-ship-down-under.html), a guided personalised tour of Archives New Zealand in Wellington (a big thanks here to Graham Langton), including a visit to see both the Maori and English versions of the Treaty of Waitangi (see www.nzhistory.net.nz/category/tid/133), the wonderful Auckland War Memorial Museum and the equally splendid Sydney Maritime Museum, including a chance to walk through a second Oberon class diesel powered submarine, built in Greenock – I had previously visited one of its sister vessels in Freemantle four years back. Just for good measure, I also did the Sydney Opera House tour, the single most enjoyable tour of an attraction I think I’ve ever been on!

Genealogically I learned so much on the trip that it would be impossible to include it all in a single post, but I now have a better idea of how to research convict migrants, the Australian and New Zealand archive sector, and a new found respect for the English and Welsh census search capabilities on The Genealogist (www.thegenealogist.co.uk) – and keep an eye on FindmyPast in all its aspects (UK, Ireland and Australasia), as there will be lots happening on that front soon! Having been to Oz last October, Toronto in June and now New Zealand, I have also concluded that Largs is the wettest place on earth, and I am now seriously contemplating migration, or even emigration!!!

The cruise itself was superb – we witnessed an active volcano (White Island), the beautiful fjords and glaciers of the sounds to the south of the south island of New Zealand, a helicopter trip over Burnie with my wife and kids, and I also did the following mad jape with my boys at Rotorua, taking my life in my hands on the Sky Swing, much to Alan and Anthea Phillips’ amusement!:

Here's the slightly more up close and personal view, via the inbuilt PanicCam!:

I think my ambition to be the first genealogist in space took one step closer to fruition! (But check out the priceless look on my face when I pull the cord!) :)

One thing that amazed me on the cruise, and something Shauna Hicks has picked up on also (see www.shaunahicks.com.au/unlock-the-past-scottish-irish-genealogy-cruise-2011-overview), was that quite a few cruisers did not wish to purchase certain vital records that may have helped to provide a solution to their brick wall problems. I was quite taken aback by this at first, until it was pointed out to me that the cost of vital records certs in Oz is considerably higher than here in the UK. I had many one on one sessions with cruisers looking for advice on their brick walls, and was as impressed as I was last year at how much they had achieved so far from Scotland and Ireland. Several of the talks I did, notably the church records one, really clicked with many on the cruise, and I’ve thankfully had a lot of good feedback on them. On the back of these I’ve also had a lot of hints from several quarters about the possibility of me doing another book for UTP on Scottish land records, so watch this space...

It was also great to catch up with some past Pharos students of mine (www.pharostutors.com), including Wayne Nolan at Little River, NZ (near Akaroa), and Julie Morgan at Sydney, Oz, and to meet Ben Mercer from Inside History there too – the magazine is now a main fixture of Ozzie genealogy, and an impressive publication (see www.insidehistory.com.au).

There are so many people to thank, I will undoubtedly fail and miss a few, but here goes anyway! First, a big thanks to Alan Phillips of UTP for bringing us out, and particularly for our day out at Rotorua, one of two days I had off, where my family, Alan and his wife Anthea had a lot of fun sightseeing. Secondly, to Rosemary Kopittke – a real hero of the UTP project, partly because we did most of the shore based sessions together, but also for putting together my new Irish book for the company – at Wellington alone we sold over a $1000 worth of stock, and that is as much about how the book looks as what it contains, so a great job well done! A big thanks also to Lynne Blake from the New Zealand Society of Genealogists, who got us all to the church on time (i.e. the lecture venues!) throughout our Kiwi trip, and to all the local reps and drivers etc who ferried us from boat to venue – in most cases our shore visits were literally hit and run raids, before getting back to the boat for the all important “all aboard time”, but on each visit I was able to learn something of the local area from some truly well informed people – including a translation of the big political scandal prior to the NZ elections (the teacup diaries!). Thanks to all!


A huge thanks also to the crew of the Volendam – including the Indonesian footballers on the crew who allowed my boys to play a match with them on an open basketball court on the ninth deck at 11.30pm at night on majorly swelling seas - and to Colette of Club HAL for looking after the boys each day! Also a huge thanks to my uncle Billy in Melbourne for looking after us on my second day off, and to my wife's sister Anita and her husband Declan for meeting up with us in Sydney, having flown over from Perth.

Unlock the Past’s next cruise is to Noumea and Fiji in early 2013 – I’m not down for that one, but keep an eye on www.unlockthepast.com.au/events/3rd-unlock-past-history-genealogy-cruise for further details – should be a lot of fun!


Finally, the biggest laugh from the whole trip came from Shauna Hicks’ partner Max. Each night our cabin stewards would make little towel animals through some weird kind of cloth based origami. Max kept upping the ante with his cabin attendants by making his own animals in retaliation. The one that could not be trumped was when he took a white dressing gown, stuffed it with pillows, and put a hat and pair of glasses on it. When the attendant went into his cabin to leave his next towel based endeavour he nearly had a minor cardiac at what was waiting for him! Shauna told my wife and myself about this over a drink and we could not stop laughing about it for ages! 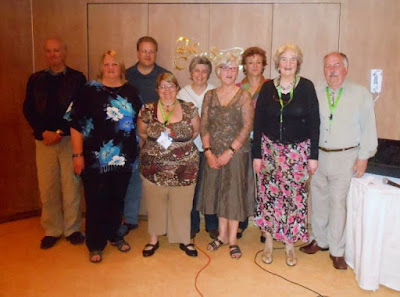 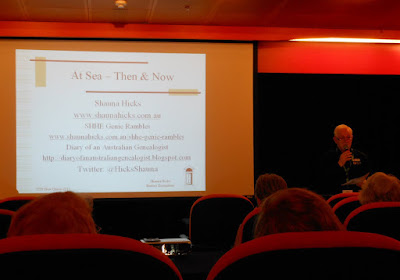 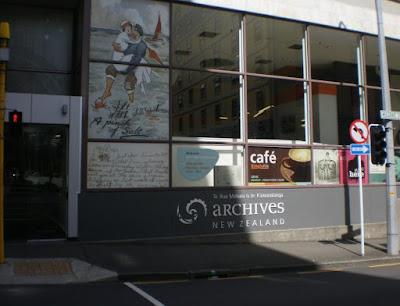 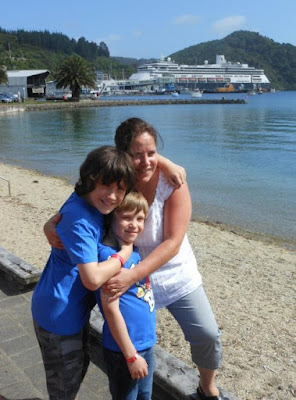 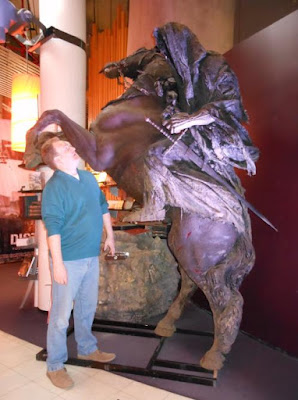 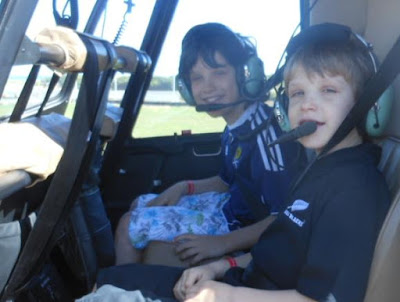 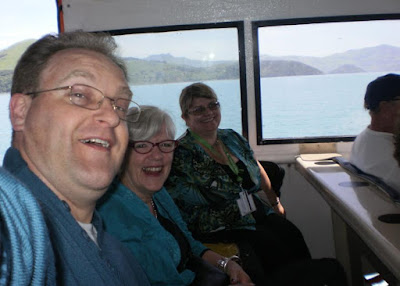