Aberdeenshire and North East Scotland Family History Society (http://anesfhs.org.uk) has asked me to provide details of some new releases, so here goes!

This 28 page A4 book is printed in full colour and lavishly illustrated with pictures of Edmond, as well as providing a detailed study of the man. Edmond was a prolific bibliographer, producing many extensive works on the historical publications produced in Aberdeen. From 1884-86 he produced the three volume The Aberdeen Printers 1620-1736, including many works published by Aberdeen's first printer Edward Raban. He subsequently formed a friendship with the 26th Earl of Crawford, based in Lancashire, and helped to catalogue the library at his son's Balcarres home in Fife.

This is a two part volume. The first provides a detailed account of Alexander Kerr's life story, an Aberdonian merchant of the 17th century who acquired the Menie estate in 1659. The book takes us through the Kerr family's time in Aberdeen, with recollections of the Covenanters, the plague, witchcraft and the historic old city itself. The second part of the book deals with the Smith family of Inveramsay (based on Garioch), connected by marriage to the Kerrs, and who also served on the council of Aberdeen. Again, fully illustrated in colour and methodically indexed. 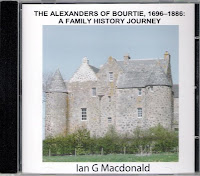 (With thanks to Jean Shirer)