Who Do You Think You Are Live in Scotland?

Scotland's Ancestral Tourism Steering Group has just sent out a letter asking for an expression of interest in exhibiting at a possible Who Do You Think You Are? Live special event to be based in Scotland in 2014, the year of the next Homecoming Scotland event. The first thing to point out is that this is not yet confirmed, and may only go ahead if the interest is there in supporting it. 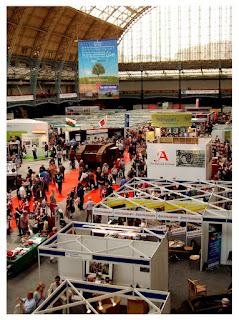 It is certainly the situation that in its usual home of London, it is the world's largest family history event, with some 15,000 visitors attending over the run of its three days. It is also the case that because it is in London, for Scots it is usually crippling in its expense, not so much for the table hire, but for the associated travel and accommodation costs which can run into four figures for groups. Obviously to have a Scottish based event would change that substantially. For all my chums in Ireland, it is also just a hop and a skip away by ferry, and for my chums down south... Glasgow's lovely! :)

The proposal is for the event to be held at Glasgow's Scottish Exhibition and Conference Centre (www.secc.co.uk). It has the full support of both VisitScotland and EventScotland, as well as the SECC, and is actively under consideration by Immediate Media in Bristol, the company that now runs the London based event.

What could your organisation do? 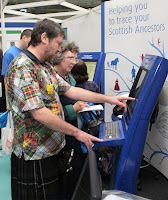 Experience from Olympia shows that the bodies who benefit most from WDYTYA LIVE! are those who engage most fully with it. Please consider the following possibilities:


And spread the word!

If you would be interested in participating, or wish to find out more at this early stage, you are asked to contact the chair of the Ancestral Tourism Steering Group, Bruce Durie, at bd@brucedurie.co.uk, and Caitlin Phetnoi at Immediate Media, the WDYTYA organisers, at Caitlin.Phetnoi@immediate.co.uk.

COMMENT: My feeling on this is that if it happens, there will never be a better run event in Scotland that would attract such media coverage, make such an impact for the Scottish public or reap such benefits for the Scottish genealogical community in all of its forms. This would be the first major international genealogy event to be held in Scotland.

Some may not have been to the event in London, and so may not realise quite how big a thing the show is. If that is the case, I would recommend having a look at its website at www.whodoyouthinkyouarelive.com - you will see a video on the right hand side of the screen that runs for just under nine minutes, with feedback from the last event from its users.

I have also previously written reports on the event both on my old Scottish GENES blog and the current British GENES blog. These reports can be found as follows:

2014 is going to be a landmark year for Scotland in terms of its visitor attractions, including the Commonwealth Games, the Ryder Cup, the Bannockburn anniversary and the Homecoming itself, but it is also a year that will focus on identity, with the small matter of a certain referendum to happen later in the year. It will be a year about Scotland and Scottishness, our future but also very much about our past, with all sorts of events to focus on what that holds for all of us, and family history absolutely needs to be at the very heart of that. I'd personally prefer someone to come to an event at the SECC to find out exactly how they are tied to our land than to waste their money in some kilt shop in Edinburgh, so this gets a huge thumbs up from me!

Please do give this some serious consideration, as I suspect opportunities like this won't come along that often.

(With thanks to Bruce Durie)

UPDATE: Just to add, the SECC also has parking for 2000 cars, Glasgow has a public transport system that works, and the SECC is a ten minute walk from the city centre...!