I was very privileged to be invited over to Belfast yesterday to take part in the new user forum for the Public Record Office of Northern Ireland (www.proni.gov.uk). The event was the first to take place in the new PRONI building. The ferry from Cairnryan got into Belfast at 9.45am and at 10.30am I was drinking coffee and eating scones (where did they get those scones?! - A+!), and ready to get going.

The meeting was scheduled for an hour and half, but actually ran closer to two and half hours, with so much to discuss. The session started with an overview of where PRONI is currently at following its move last year to its fantastic new premises at Titanic Quarter (honestly, compared to the old building it's the difference between night and day!). Some interesting statistics were quoted. Despite an overall drop in tourism in Northern Ireland of 12%, there was a whopping increase in cultural tourism of 62%, and PRONI has clearly been reaping some of the benefits. 39% of new visitors in 2011-12 were not from Northern Ireland - 10% were from England and Wales, 9% from the USA, 6% from the Republic of Ireland, and perhaps somewhat surprisingly to me, 2% from Scotland. (It's £15 day return on the ferry just now, a doddle!). The main reason for new registrations was overwhelming family history, at 73%. (Full specs on all of this are included in the PRONI Digest released a few days ago - see http://britishgenes.blogspot.co.uk/2012/11/pronis-year-2011-2012.html)

There were many individuals at the meeting from various walks of life, ranging from the professional genealogists, the North of Ireland Family History Society, the BBC and others. I was invited to PRONI as a 'remote user', in other words as someone who uses the web offerings from the facility. I was hugely encouraged by the discussions on PRONI's approach to placing material online, it sees it as one of several key priorities. In the last year their website had 10,213,338 hits, with the most popular holding being its wills calendars collections - something I tend to use mostly myself when using the site. There are many major developments happening soon with the PRONI site (some of which I have previously mentioned on the blog, but now have some firmer detail on) - here's a taster:

1) The Revision Books from Griffith's Valuation, catalogued under VAL12B at PRONI, have all been digitised in partnership with Family Search, and will be tested in February 2013 and hopefully going online circa March 2013. The Revision Books are essentially the next bit after the Primary Valuation recorded by Richard Griffith in the mid-19th Century - they record changes of ownership and valuation right up to 1930 for each property in Northern Ireland. PRONI fully expects this to be as popular, if not more, than its wills calendars collections. (We'll be getting a preview of this at the next user group meeting). 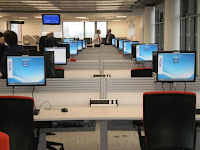 2) The PRONI website is to be integrated into the Northern Ireland Direct website next year - it's not something that anyone appeared too keen on, but it is happening. How or even if that will have any affect on current URLs is unclear, but it seems likely. It was emphasised that none of the content would be disappearing, its simply a migration to a new platform. The same thing recently happened with the GRO website in Belfast. (With that site, the easiest way to find GRO pages at present is to actually go to the NI Direct page that tells you everything has moved, at www.nidirect.gov.uk/gro-content-has-moved!)

3) Drum roll please....! PRONI has redeveloped its Street Directories interface, and we were treated to a sneak preview. If you're a regular user of the site, this is going to be quite an emotional moment...

To set some context: the PRONI website in virtually all respects is brilliant, and is one of the easiest to use of all UK archives, with one exception - its Street Directories page at www.proni.gov.uk/index/search_the_archives/street_directories.htm. I'd say that the reason why the Wills Calendars pages are the most popular is simply because the user experience on the current directories page is horrendous - performing searches on it is like looking for your granny in a vat of treacle. Fortunately, it's also been winding up PRONI staff, so much so that they've rebuilt it. Janet Hancock has been working hard to get the thing turned around, and showed us yesterday how the new screen will work. In performing a search now, any search term will be returned on a page within a highlighted box - not only that, but if you do a search for a term such as 'John Smith', the two words will be highlighted on the page in different colours - it makes looking for the thing on the page a heck of a lot easier than at present. There is also a new filtering system integrated, so you can narrow down to a directory section on a particular village, considerably improving browsing options beyond stepping ahead or back a page at a time. You can also download pages in PDF format, and much more. Expect this to go online early 2013 - and your happiness levels to rise accordingly.

4) I mentioned some time ago that I successfully made a Freedom of Information  request for access to information held in the 1939 National Identity Register for Northern Ireland, on the back of similar information having been made publicly available in Britain (see http://scottishancestry.blogspot.co.uk/2010/03/1939-northern-irish-foi-request.html). For those not in the know, this was an emergency wartime census carried out in September 1939, a couple of weeks into the war. What I had not appreciated was that I clearly had the luck of the Devil in obtaining this - not through any intransigence from PRONI, but through the simple fact that there was no index. It turns out that the request I made was successfully dealt with simply because the second box that was opened with the books just happened to have the right entry - it was a pure fluke. Not only that, but there was no clarity as to who was actually responsible for the records, which also had to be resolved (my request was the first they had received).

I apologised profusely to Ian Montgomery about my FOI request, when I saw the look of pain on his face as he described what they had to do to resolve this for further enquiries! The good news is that PRONI has created an index for the collection as part of its cataloguing activities. This is not online, and there was no discussion about it going online - I'm also unclear as yet as to how it was catalogued (i.e. by name or district etc), but the upshot of the exercise is that it will be considerably easier for now for PRONI to handle FOI enquiries on the collection. I caught up with Ian after the meeting, and he mentioned that one of the real frustrations was that there also appeared to be no logic as to how the records were compiled, which also caused issues. My apologies to all at PRONI for any agony I may have caused - but thanks, as a resource it certainly helped me with my own research, as it undoubtedly will for others.

5) PRONI will be creating a World War 1 sources guide next year.

There was also some discussion on forthcoming events.

1) On January 23rd there will be a Holocaust Memorial event at PRONI about the Jewish Community in the North of Ireland. 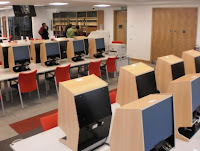 2) From February 18th to March 15th there will be a temporary exhibition at PRONI entitled Exploring Your Roots.

4) There are further lecture series planned from the Linen Hall Library and with the Open University.

5) The World Police and Fire games are being held in Northern Ireland next year, and to tie in PRONI will be hosting a Family History Fair from August 3rd-4th 2013.

6) Next year sees the 400th anniversary of the granting of charters for the foundation of several major towns and cities in the north, including Belfast, Derry, Newtonards, Bangor, Coleraine, Killyleagh and Limavaday. PRONI plans to hold two 2 day Plantations conferences on this next year, details to be forthcoming.

Finally it looks like PRONI will also be trying to find ways to engage with The Gathering in the Republic of Ireland next year, it seems the Government is keen to get involved to some extent. One of the things that was discussed was the fact that PRONI actually has a lot of archival materials for lots of border counties on the Republic side, such as Mongahan, Donegal and Cavan, which some down south may not be aware of. So do have a look at the catalogue if you are from there, there is a tonne of good stuff there also!

Having a Christmas present crisis?! Check out my range of genealogy books at http://britishgenes.blogspot.co.uk/p/my-books.html - perfect for the family historian's Christmas stocking...! Also now out - new Kindle edition of Tracing Your Family History on the Internet, from http://tinyurl.com/d3vqtz5
Posted by Chris Paton at 12:21