The Wills of Our Ancestors - review

This is a review of sorts - the problem being that the book I'm featuring is one that I haven't finished yet! However, I am so impressed with what I've trawled through already that I want to make sure you're able to get it before Christmas! 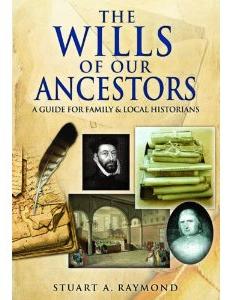 I recently received a copy of Stuart A. Raymond's new book The Wills of Our Ancestors: A Guide for Family and Local Historians, published by Pen and Sword. Often books written down south on apparently universal record types that cover the UK will be primarily about England and Wales, and have a token 2 pages on Scotland and/or Ireland as if somehow they're just an appendix to the main event, instead of a subject that can be as equally complex and detailed as the other two countries of the UK. This book unashamedly states on the first page that it does deal primarily with England and Wales, and doesn't claim otherwise. No problem, that's great - so why am I so excited by it, as an Ulsterman living and working in Scotland, and primarily within Scottish genealogy?

Even when something is about England and Wales, territories in which I only occasionally do client work in, I always like to find something to latch onto in a book that I can relate to before looking at the stuff I don't usually deal with. So the first thing I did was to go through to the Scottish part, on page 96, to see how well covered the situation was here. It's only four pages, but it's really well written. For such a short section it packs in a hell of a lot, and doesn't just say 'go to ScotlandsPeople'! Good start - at this point it's a book about England and Wales, but it has a decent Scottish section (and Ireland, the Channel Islands and Man are equally give the punchy treatment). So then I went to the start of the book - and that's when it really took off...

Stuart's introduction within the first few pages does something you don't often find when people deal with Britain - it provides an understanding of how the legal systems in both Scotland and England used to deal with probate before the respective Reformations in both countries, and before they went down different routes from the 16th century onwards (1540 down south, 1560s here in Scotland). He starts off with a brief description of how wills originated in feudal England - and by doing so he's allowed me to understand how similar the systems for probate once were north and south of the border. It makes perfect sense, with the two countries using the Roman Catholic ecclesiastical courts for some of the process, and the respective Crowns in both countries to retain controls over the inheritance of land under the feudal system. It's actually quite a short introduction, but it basically allowed me as someone more clued up on the Scottish system to twig how the English system evolved.

From this point on it's fairly much about England and Wales all the way, and well written with topics such as the physical process of English probate, the location of records and more. It's incredibly accessible, even for a Johnny Foreigner like me - for example, on page 17 he mentions how a customary law prevailed to 1692 in the Province of York only, which denied testators an unrestricted right to dispose of moveable heritage. They had to give a third of their estate to their widow, a third to the children and then dispose of the final third themselves - exactly the same as the Scottish system (the jus relicate, the legitim and the deid's part). So I'm reading a book about a system I don't normally deal with, and completely on the right wavelength, because he's taken the care to bring me along as an 'outsider' - brilliant.

The book is structured to be two thirds background and context etc, with some useful case studies quoted along the way, and then the final third with some useful appendices, including a handy summary of pre-1858 probate courts for England and Wales, a Latin glossary, and other useful resources. If you're looking for a comprehensive guide on the subject, this is it - and if you're overseas, north of the border or just over the water, it makes the subject easily accessible.

I'm about a third of the way through it so far - and on what I've read so far, I would thoroughly recommend asking for it for your Christmas stocking! There's a print edition from Pen and Sword (www.pen-and-sword.co.uk) and also a Kindle edition via Amazon.

Having a Christmas present crisis?! Check out my range of genealogy books at http://britishgenes.blogspot.co.uk/p/my-books.html - perfect for the family historian's Christmas stocking...! Also now out - new Kindle edition of Tracing Your Family History on the Internet, from http://tinyurl.com/d3vqtz5
Posted by Chris Paton at 15:53