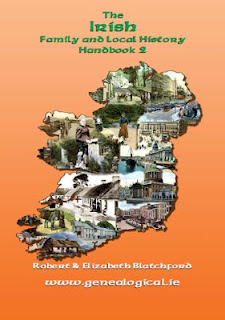 I've just received my contributor's copy of the Irish Family and Local History Handbook 2. The book was first launched in Dublin at the recent Back to Our Past event, but will be released for sale at Who Do You Think You Are Live 2013.

So what's in it?! At 224 pages it packs in a heck of a lot of content, as did the first edition, including an updated Genealogical Services Directory at the back - a Yellow Pages of all you'll need to know in terms of Irish based groups and associations to help with your research. The main articles are the reason to keep coming back for more - in this case there are many key guides on resources such as the holdings of the National Library of Ireland, the National Archives of Ireland (Aideen M. Ireland) and the National Museum, the Public Records Office of Northern Ireland (Ann McVeigh), the new Genealogy Advisory Service at the National Archives, Dublin City Archives, the Representative Church Body Library in Dublin, and more. Repositories in Britain are also explored, such as the National Archives at Kew (Audrey Collins) and the Imperial War Museum (Sarah Paterson).

On specific record types there are various useful pieces, such as Mary McConnon's look at Roman Catholic parish registers, William Roulston's exploration of Irish Presbyterianism, and Fred Feather's article on the Gentleman's Magazine. Emma Jolly explores the Irish in London and India, Rosemary Dixon-Smith traces them in South Africa and Beryl Evans looks for the Irish in Wales. Elsewhere, Joseph O'Neill looks for navvies in Britain and in the Spanish Civil War, and Fiona Fitzsimons looks for Bram Stoker's Irish connections. I take a look at online resources, explore the 1901 and 1911 censuses and also tell a family story that saw my family travel half way around the world. And that's not even the half of it...!

The book is priced £10, but although it won't be on sale until the end of February, a pre-order facility will be going live at www.genealogical.ie in January.

Of course, we're not all blessed with Irish genes! If you're in that camp, and fancy something a little different, then here's a first taste of something else being released by Bob and Liz Blatchford at Who Do You Think You Are Live 2013 - the new 14th UK volume of The Family and Local History Handbook 14. 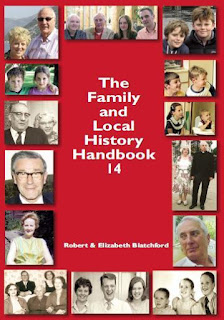 (With thanks to Bob Blatchford)

Having a Christmas present crisis?! Check out my range of genealogy books at http://britishgenes.blogspot.co.uk/p/my-books.html - perfect for the family historian's Christmas stocking...! Also now out - new Kindle edition of Tracing Your Family History on the Internet, from http://tinyurl.com/d3vqtz5
Posted by Chris Paton at 17:43