Something I've just noticed on the new version of the FindmyPast site (www.findmypast.co.uk), and it is not about the site functionality (plenty of other threads going on on that front!). No, this is about the census source information that is given for the Scottish censuses.

Prior to this relaunch, the source information displayed for Scottish censuses differed horrendously between the US site and the UK site. Occasionally the UK site fouled up on how it recorded source info - e.g. with references such as a registration district number such as 644/1 occasionally being rendered as 6441, and with irritating gaffes such as using English and Welsh terminology (as catalogued by the National Archives at Kew) to describe the Scottish returns. Although there were issues with the UK FMP site, the US site by comparison was a complete basket case in its citation.

Here is an example, using my 2 x great grandfather William H Paton in 1871, located at Blackford, Perthshire. The source for his entry, as variously recorded online:

i) According to Ancestry: "Registration Number 333, ED 2, page 16, line 1" - The correct description is almost given here, except 'Registration number' should be 'Registration District'.

iii) According to FMP.com (US): "Archive Reference RG10, enumeration district 2". Say what?

Now, however, FMP UK has decided that Scottish census source info will also display the US featured RG numbers - which is useless. And something now shared by all the worldwide FindmyPast platforms. 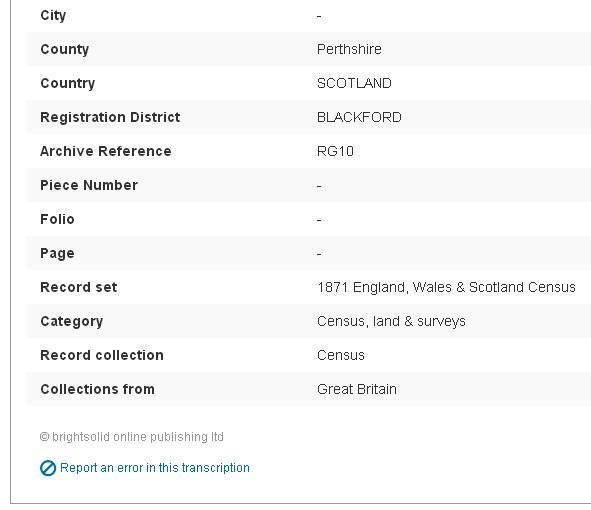 Simply put - not fit for purpose. I've left a note on their feedback thread.

Time to find your inner Irish...! All the best online Irish genealogy resources can be found through my book Tracing Your Irish Family History on the Internet - in print and ebook formats. "Very useful, makes me wish I was Irish!" - Saint Patrick, patron saint.
Posted by Chris Paton at 14:05