From Portsmouth Historic Dockyard (www.historicdockyard.co.uk), news about the opening of the new National Museum of the Royal Navy facility (www.nmrn.org.uk):

National Museum of the Royal Navy Celebrates 100 years of Untold Stories with the opening of new £11.5M Visitor Attractions

From the gun that fired the first British shot of the WWI, the only surviving British WWII era submarine to modern day conflict in Afghanistan

1. HMS ‘Hear My Story’ – opening of the new £4.5M permanent galleries, with a dedicated exhibition, recounting the remarkable experiences of over 1,000 men and women in the Royal Navy over 100 years

2. ‘Racing to War: The Royal Navy and 1914’ – the Museum’s new major temporary exhibition devoted to the outbreak of the WWI, charting Britain’s naval history from its triumph in the Anglo-German naval arms race – one of the several intertwined causes of the outbreak of the WWI, illustrating how the Royal Navy was instrumental in the building of the Grand Fleet, to looking at influential personalities such as Sir John Fisher (First Sea Lord and considered one of the most important figures in British Naval history) 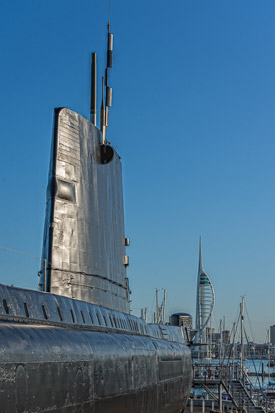 3. HMS Alliance – the only surviving British WWII era submarine re-opens following a £7M conservation and restoration project. The public will be able to go on board and meet a submariner to discover what life was like to live and work under the waves. The Alliance experience will also include a film narrated by British Hollywood star Ian McShane

For the first time in British history, 100 years of naval life will be told by The National Museum of the Royal Navy (NMRN) covering a thousand stories from the men and women who served at sea over the last century.

Located within Portsmouth Historic Dockyard, home of the Royal Navy, today Thursday 3 April the Museum launches two new major exhibitions – ‘HMS Hear My Story’ - the new £4.5M permanent Babcock Galleries, as well as its first major temporary exhibition ‘Racing to War: The Royal Navy and 1914’. Today will also see the re-launch of HMS Alliance, following a £7M conservation and restoration project – the only surviving WWII era submarine, serving as a memorial to 5,300 submariners, which the public will be able to explore with tours from those who served in the service.

The new galleries and exhibitions, as well as HMS Alliance will join the recently opened Mary Rose Museum, as key UK visitor attractions showcasing the very best of the Royal Navy’s heritage through contemporary and interactive experiences for all the family, as well as history aficionados alike to enjoy.

Visitors to The National Museum of the Royal Navy will be able to visit all three new attractions with one ticket. The ticket also grants access to the entire Historic Dockyard, including the Mary Rose Museum, HMS Victory, HMS Warrior 1860, Action Stations, Harbour Tours and Explosion and the Museum of Naval Firepower.

One hundred years, 1,000 stories, 1 Royal Navy. For the first time, the exhibition will tell the unknown and undiscovered stories from the ordinary men, women and ships that have shaped the Navy’s astonishing history over the last 100 years. Over a thousand stories will be told, bringing visitors closer than ever before to the real Royal Navy. Highlights will include the 4-inch gun from HMS Lance, which fired the first British shot of the First World War on 5 August 1914, unpublished love letters from a serving Chief Stoker dating back to the First World War, the first public display of Admiral Crutchley’s WW1 Victoria Cross medal, oral testimonies from the sailor survivor from HMS Hood, to the D-Day landings and beyond, as well as the damaged motorbike of a suicide bomber from Afghanistan.

Devoted entirely to the First World War, the collection will reveal for the first-time unknown stories from the Royal Navy in the lead-up to the outbreak, with unique objects and art specifically curated for the exhibition, such as Lieutenant Vere Sidney Harmsworth’s sword that he used in combat. It will chart Britain’s naval history from its triumph in the Anglo-German naval arms race - one of the several intertwined causes of the outbreak of the WWI, to illustrating how the Royal Navy was instrumental in the building of the Grand Fleet. The exhibition will also address influential personalities such as Admiral Sir John Fisher, who transformed the Navy of the Victorian age into a military machine capable of maintaining Britain’s naval supremacy in the First World War. He is considered one of the most important figures in British Naval history.

A rare collection of twentieth century paintings, many on display for the first time, will depict scenes of the Royal Navy in battle and the aftermath of fierce fighting at sea – including ‘The Wounded Lion’ by artist William Wyllie, as well as propaganda posters such as ‘Remember Scarborough’

Based at the Royal Navy Submarine Museum, part of The National Museum of the Royal Navy, HMS Alliance will be ‘patrol ready’ as she opens her hatches following a major £7M conservation and restoration project.

A visit onboard HMS Alliance will begin with a brand new “Alliance” film narrated by British Hollywood star Ian McShane, specially commissioned to support this project highlighting life on board from WWII through the Cold War until the 1970s and serving as a memorial to 5,300 British submariners.

With new dressing, lighting, noises and even smells inside the submarine, as if the crew have just gone ashore, the visitor will take a time journey through every decade of the submarine’s service from the 1940s to the 1970s. Visitors will also be able to peer through the working periscopes to view Portsmouth Harbour, and meet submariners who will tell their own personal stories of working beneath the waves.

Time to find your inner Irish...! All the best online Irish genealogy resources can be found through my book Tracing Your Irish Family History on the Internet - in print and ebook formats. "Very useful, makes me wish I was Irish!" - Saint Patrick, patron saint.
Posted by Chris Paton at 11:57