Last night I spent ages on the new GRONI genealogy records platform (https://geni.nidirect.gov.uk/), which is offering access to civil registered BMD events from Northern Ireland from 1845. I wrote an introductory review on first impressions last night at http://britishgenes.blogspot.co.uk/2014/03/groni-launches-online-civil-records.html.

I spent about £60 on the site last night, utterly transforming many branches of my personal family history research in Northern Ireland. Some further thoughts and tips: 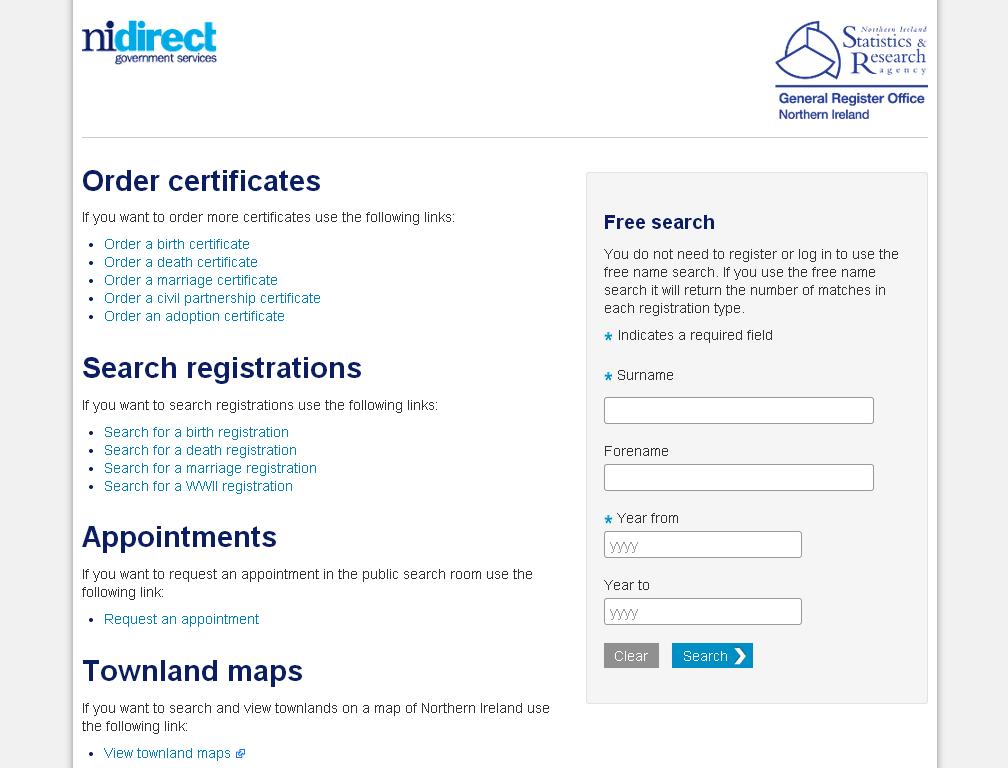 1) In most cases I did not need to bother using the enhanced search at an extra credit (40p). I simply used the basic search and then purchased the full record from that point. The indexes were in most cases detailed enough - I could do parental searches, to seek children not before known about, including the amazing revelation (for me) that my 2 x great grandfather Ernest Graham was a twin. I told my Melbourne based cousin about this (also a Graham) - she found this hilarious as she has recently had twins herself. Not sure how she'll react when I tell her that Ernest's parents had two sets of twins!

2) In some lines, where I was not so desperate to see the full record, I used the enhanced results at 40p each to view. These did the job, with enough detail to help me to eliminate possibilities in a couple of circumstances where there were a fair few options.

3) You cannot access the basic search results without any credits. However, unlike ScotlandsPeople, which charges £7 for 30 credits, the minimum spend required to access the basic (free) search facility is a purchase of just one credit at 40p - not per record, but to access the facility in general. In other words, free search results will be available as long as you have 40p - 1 credit - on your account. Bear in mind that with the free search facility you can work out the names of children to two parents, with birth dates, and more. It's not perfect - I was surprised to see a second family with the father's surname as Graham and the mother's maiden name as Halliday - but it is considerably better than what has been available before.

4) Death searches are the hardest to control, not so much because of the site, but because of the nature of Northern Irish records, which like the English and Welsh records offer little by way of corroborative genealogical details. One aspect here that I don't rate on the site though is the facility offering a chance to put in an exact date of birth - a year with a plus or minus range would certainly help here instead. It is possible to do the maths with the basic search returns, as an age is given, but I could do with an easier life!

5) I have had feedback from a reader that there may be issues with iPad access. I did use the site with my iPad last night to access basic search results, but I did not attempt to purchase and view images, and I was already registered. On that limited basis, I had no problems, but if anybody else has any comments on that, I would be grateful to hear them.

7) I have read quite a few negative threads on a couple of forums about the new platform, commenting primarily that it isn't ScotlandsPeople, and that it isn't the sexiest looking site. On the latter I agree (I described it as a passion killer in my previous thread!) - but on the former, there was no obligation for it to be a ScotlandsPeople clone. The site was inspired by ScotlandsPeople - the GRONI actually visited Edinburgh to take advice - but it has clearly done its own thing. Some aspects of GRONI's site are in fact better than ScotlandsPeople - a minimum spend of 40p being the ultimate example. On the other hand, I don't understand the logic in not allowing downloads of the records - does GRONI think people are so flush with cash that having paid to see a digital copy of the record they will then pay to see paper copies?

I spent about £60 last night, resolving many brick wall situations I have had for years. In all those searches I chose two wrong records, both of them death records where it was worth a punt. The death of my four times great grandfather, Thomas Graham, still eludes me, though I have now further narrowed it down to a six year range thanks to events with siblings and his widowed wife noting when he was alive and dead. Two other lines have now been pushed back into the late 1700s thanks to discoveries made, and several ancestors' deaths have finally been located after years of being in the void. This researcher will most definitely see the new site as very positive thing, albeit one that will hopefully evolve in due course to correct some minor irritations for its users. By far the biggest issue is the inability to download images, or to at least create a digital account for folks using the site, as with ScotlandsPeople. People are going to flout the no screengrabs facility - of course they are - if such a draconian rule is not amended to be a bit more user friendly; and having spent £60 or so last night, I have absolutely no intention of paying more for paper copies! So this could certainly do with being looked at again.

Incidentally, with respect to the online closure periods for access to record categories - these are not implemented if you visit the GRONI in Belfast, meaning you can look for much more recent births, marriages and deaths.

Time to find your inner Irish...! All the best online Irish genealogy resources can be found through my book Tracing Your Irish Family History on the Internet - in print and ebook formats. "Very useful, makes me wish I was Irish!" - Saint Patrick, patron saint.
Posted by Chris Paton at 11:17