It's truly the end of an era. The Origins Network (www.origins.net) will no longer be an independent data vendor - the following has just been announced by FindmyPast:

London, UK, June 17, 2014. Findmypast.co.uk, the leading British family history company, announced today that it has bought Origins.net, one of the early pioneers of online records.

The first company to set up a pay-as you-go model for online family history records, Origins.net specialises in unusual and often hard to find British and Irish records. Its many early records include rare marriage indexes, apprentices and poor law records. Another key strength is its National Wills Index, which, combined with collections currently on Findmypast and those in development, will provide the largest online resource for UK wills and probate material.

Elaine Collins, Partnership Director of Findmypast said: “We are delighted to bring Origins and its founder, Ian Galbraith, into the Findmypast group of family history brands. By joining together, we are able to offer customers the most comprehensive collection of British and Irish online records. This rich collection will help descendants of early North American settlers to bridge the gap to the old country, as well as anyone with UK ancestry looking to delve beyond 19th and 20th century records.”

Ian Galbraith, founder of Origins, said: “The partnership with Findmypast makes perfect sense for both companies and their customers. We have had a long association and together we can offer a broader family history experience and help people to fill in the blanks on the family tree and enrich their family story.”

COMMENT: A huge thanks has to go to Ian Galbraith from many of us north of the border, and indeed across the British Isles, for Origins was the site that really kick-started the whole online genealogy records revolution in Scotland, and I would argue, Britain, when in 1997 it launched an online index to birth, marriage and death records from the General Register Office for Scotland, in partnership with that body, called Scots Origins. When the English 1901 census was first launched, somewhat disastrously, by the National Archives at Kew, Scots Origins already had two Scottish censuses online and available. However, a few years later the company lost out on the contract to continue running the Scots Origins site to Brightsolid, which then replaced the service with its own ScotlandsPeople facility, which continues to this day.

Despite a short lived look up service for records at the GROS in Scotland, the company's Scottish connection was soon radically curtailed. Two other wings which developed, however, British Origins and Irish Origins, soon flourished, despite their ups and downs. Partnering with the Society of Genealogists and Eneclann to bring further material online, some of that content was later removed and placed on FindmyPast, though its National Wills Index is still going from strength to strength, as well as its other English and Irish offerings.

FindmyPast has mentioned that Origins' collections will be integrated into its offerings 'over the next few months', and that the Origins site 'will continue to run as usual', though for how long is now perhaps anybody's guess.

Finally, in tribute to the original site, which was a Godsend in the days when whilst working at the BBC I could not get to the GROS on Mondays to Fridays, and which is one hundred per cent responsible for luring me into changing my career in due course (!), here's a wee blast from the past, courtesy of the Internet Archive (www.archive.org): 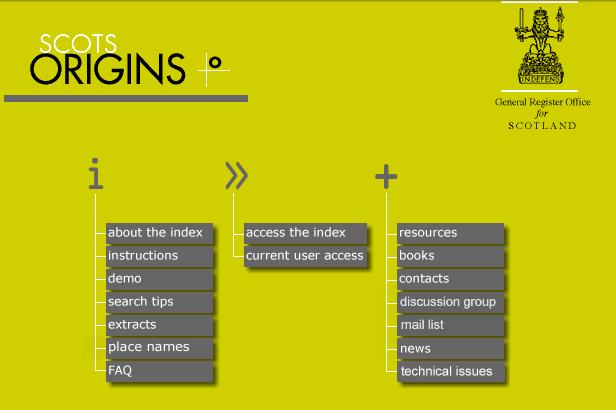 (With thanks to Myko Clelland)

Now available for UK research is the new second edition of the best selling Tracing Your Family History on the Internet: A Guide for Family Historians, whilst my new book British and Irish Newspapers is also now out. And FindmyPast - please reinstate the original Scottish census citations on your new site.
Posted by Chris Paton at 17:01