Another in an occasional series of reprints from articles I've written elsewhere, including my Scotland: Walking in Eternity blog, where the following first appeared in November 2010.

One of my favourite historic records found to date is the following from the records of the Weavers Incorporation of Perth in 1703, proving that many Scots three hundred years ago had the same healthy attitude towards authority as their descendants do today! 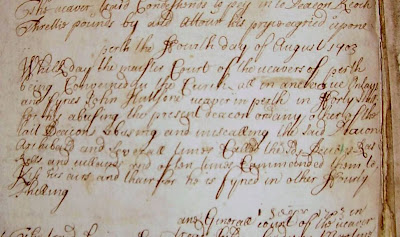 Perth the ffourth day of August 1703

Whilk day the master court of the weavers of Perth being convened in the c[h]urch all in ane voice inlays and fynes John Huttsone weaver in Perth in fforty shill[ing]s for his abusing the present Deacon and any other of the laite Deacons[,] abusing and miscalling the said Deacon Archibald[,] and several times Called the s[ai]d Deacons Raskells and villainds and often times commanded them to kiss his airs and thairfore he is fyned in other ffourty shilling[s]

Perth is where my Paton weaver ancestors hailed from - which may explain my own healthy attitude to authority at times! :)

UPDATE: At the time when I first wrote this the records were in private hands, but they have now been deposited with Perth and Kinross Archives. A web project that I placed online a few years ago has some additional records for Perth's handloom weavers - it can be found at http://perthweavers.bravehost.com. Note that the records concern the burgh of Perth, and not the county of Perthshire.

Now available for UK research is the new second edition of the best selling Tracing Your Family History on the Internet: A Guide for Family Historians, whilst my new book British and Irish Newspapers is also now out. And FindmyPast - please reinstate the original Scottish census citations on your new site.
Posted by Chris Paton at 16:53