I attended the Scottish Genealogy Network visit to St Andrews yesterday, for the latest in our monthly meetings, which I think we should probably describe as our monthly jolly genie jamborees, being so much fun! Each month we meet up to network, catch up on latest developments that will affect our genealogical research as professional genies, and most importantly, to try to engage with the wider archive, library and FHS communities to help with our personal continuous professional development, usually by way of a visit to an archive or some other institution.

So yesterday the plan was for an early start to St. Andrew's Holy Trinity Church, where John Knox famously preached the opening salvoes of the Scottish Reformation. This was the first time I had returned to the church in about twelve or thirteen years, having previously been there to direct part of an episode of a BBC Scotland TV series on the history of the Kirk (specifically about John Knox), but the church has a much longer history than just one event. 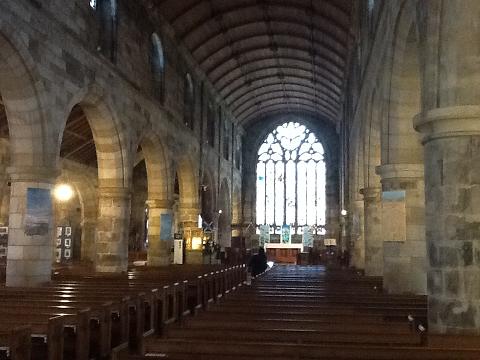 There's a great exhibition about the history of the church itself inside the building - but what will be of particular interest if you are researching Scottish family roots, and you happen to be in St Andrews, is the display of some of the means by which the kirk session sought to instil discipline in its flock (as part of the Godly Commonwealth ideal that Knox gained from Calvin amongst others). One of the first exhibits you come across is a bench with the word Repentance inscribed on it, on which those who had been hauled before the kirk session were subsequently made to sit in front of the congregation to be publicly humiliated if they had been found guilty of an offence. I suspect those guilty of antenuptial fornication were made to sit at opposite ends... I took some pics using my iPad, but this one didn't come out so well, so take a look at https://www.flickr.com/photos/safetyrazor/9292291018/in/set-72157634643709699/ for an image. 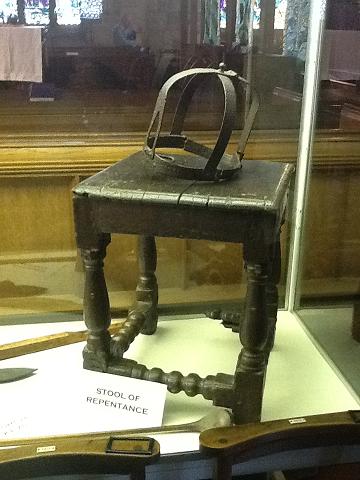 Also present and on display was the Stool of Repentance from the seventeenth century - you'll be guaranteed those guilty of antenuptial fornication were not allowed to sit on each other's laps (this was very much for the individual sinner!) - and a Scold's Bridle (aka a Bishop's Branks). This was an iron muzzle that was placed onto an offender's head, with the bridle inserted into the mouth, with a protruding bit that into the mouth which pressed the tongue down, preventing the offender from speaking. I tweeted about this last night, and one reader responded "Fortunately, some of us were able to go to Confession", which made me laugh. I wonder how many who ended up sitting on the stool with their bolted into a birdcage contemplated whether the Reformation had been quite all it had been cracked up to be - even if only for a moment! Also present in the church are a wonderful war memorial, and the Sharp Aisle, holding the supposed tomb of Archbishop James Sharp, who was murdered at the hands of nine Covenanters in 1679, he having turned on Presbyterianism to implement the diametrically opposed theology of episcopal Anglicanism (under the rule of bishops) through a harsh regime of persecution. The tomb itself, though, is said to be in fact empty. 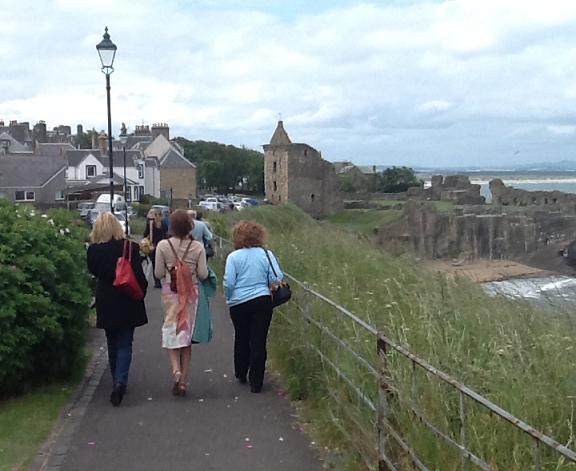 After our church visit, we had a bite to eat, and then went for a wee dander to the abbey and then along the shore for a walk towards the castle, before heading to our next location, where we were joined by additional members of the SGN who had come for the afternoon session only. The venue was the newly refurbished St Andrew's University Library Special Collections facility, recently renovated in December of last year. Greeting us was archivist Norman Reid, who I first had the pleasure of meeting at a conference in Dundee last year, where we had both given talks within the same afternoon session. At that event Norman had described the set up at the facility as being a slightly awkward one, in that the Special Collections Department was temporarily based in a portacabin somewhere in St Andrew's, as work on renovating the main facility was under way. Well now he was able to show us the reading room, and my immediate thought was "if only all Scotland's reading rooms were so gorgeous" - the room has 45 seats for postgraduate students, each with sockets for laptops, though there is open access for non-students also. Magic. 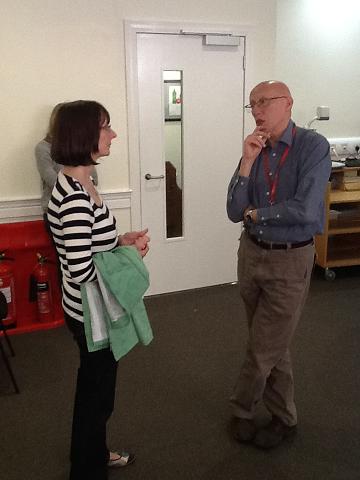 Norman then led us into a side room where he had laid out several documents for us to see. He started by explaining the set up of the Special Collections facility. The university is the third oldest in the English speaking world, and so has been collecting materials for centuries. In addition, for several decades the institution has also acted as an unofficial local authority archive for north east Fife, and much of the whole county. The upshot of that is that when doing Fife research, don't just think of the Fife Archives facility at Markinch (near Glenrothes) as the only archive, because St Andrews also hosts many valuable collections, including kirk session minutes, burgh records, etc (the two archives work quite closely on many projects). The archive is responsible for the university's books and manuscripts collections (some 210,000 books alone, and manuscripts from 1st century Greek papyrii to modern business records), for the university's own institutional records (muniments collection), and a photo collection of images, including particularly significant holdings from the advent of photography in the 1840s-1860s, with St Andrews a major centre in the development of photography. In total the archive holds about thirteen and half kilometres of shelving. 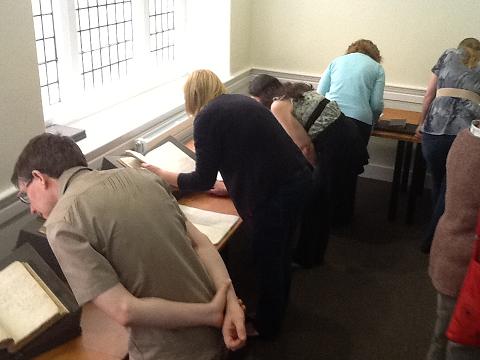 There is one disadvantage with the facility, in that the collections are not stored on site, and so if you wish to visit you must identify what you would like to see by 3pm of the day before your visit (the off site storage is a couple of miles away, so there is one productions delivery a day). When you first arrive you will be asked to register, so bring photo ID with you. There are three separate catalogues online - a rare books catalogue, a manuscripts and muniments catalogue and a photographic database. These are quite extensive, but nothing like complete - Norman made the point that because so much is online, people often assume that if they can't find a record on the online catalogues, it mustn't be held by the archive - that may well not be the case, so email them to ask for advice. One thing Norman mentioned was that with archive cataloguing standards having changed so much in recent times, particularly since the advent of online cataloguing, a lot of the archive's collections are inadequately described in modern terms, and they are probably about a century behind in trying to catalogue everything by modern criteria - but a lot of material is still catalogued, it just may not be online yet. The online catalogues are accessible at http://www.st-andrews.ac.uk/library/specialcollections/. 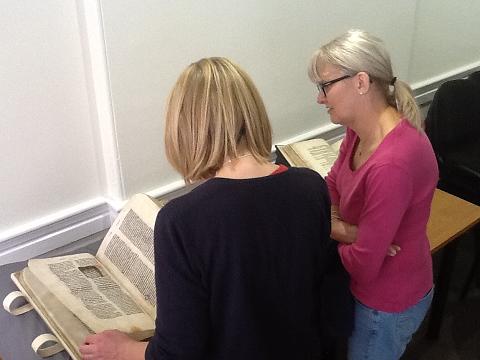 Some of the treasures we were then allowed to look at included family history materials on the Playfair and Anstruther families, the kirk session records from Holy Trinity Church, a kirk session register detailing coal distribution from the 19th and 20th centuries, a 15th century heraldic chart tracing a tree back, a roll portraing the history of the English royal family, a honeymoon diary, a merchant's ship log book detailing voyages to Norway from Scotland, and much more.

After an hour and a half we said farewell to Norman, before heading off to a couple of hostelries for beers and teas. It was a great day out, with great weather and good company. Next month we're off to Hawick!

If you work professionally within the Scottish genealogical scene, there is more about the Scottish Genealogy Network at http://scottishgenealogynetwork.blogspot.co.uk. 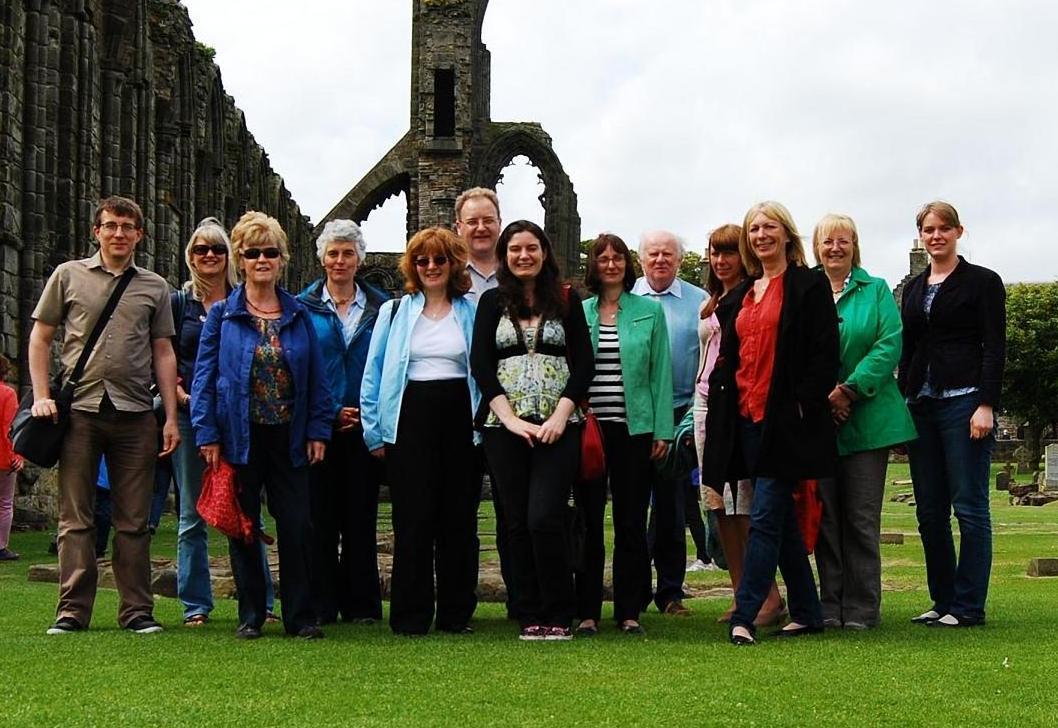 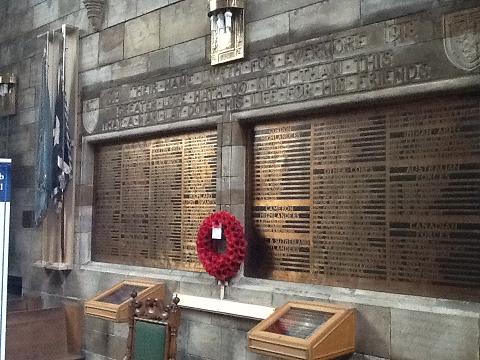 (With thanks to Norman Reid, to SGN member Caroline Makein for facilitating the visit to the archive, and to Emma Maxwell for the group pic!)

Now available for UK research is the new second edition of the best selling Tracing Your Family History on the Internet: A Guide for Family Historians, whilst my new book British and Irish Newspapers is also now out. And FindmyPast - please reinstate the original Scottish census citations on your new site.
Posted by Chris Paton at 12:59