There's a fairly major addition to Ancestry (www.ancestry.co.uk) in the form of a new collection entitled Great Britain, Atlas and Index of Parish Registers, located at http://search.ancestry.co.uk/search/db.aspx?dbid=8830. This is in fact a reproduction of The Phillimore Atlas and Index of Parish Registers, published by the Institute of Heraldic and Genealogical Studies.

The Phillimore maps are incredibly useful for England, Wales and Scotland, not only showing the historic early 19th century boundaries of established church parishes (the Presbyterian based Church of Scotland and the Anglican church in England and Wales), but also indicating when the known surviving parish records commence their runs.

One of the things that may be a surprise to some is to see a parish or county split into two unconnected parts - in Scotland, look at the map for Ross and Cromarty, for example, where various areas within Ross are noted as 'part of Cromarty', whilst in Perthshire, a split parish example is Logierait, which is in two parts, separated by the parishes of Dull and Fortingall, and where you will see a line resembling a stretched H joining the two parts as a visual aid to highlight the fact. 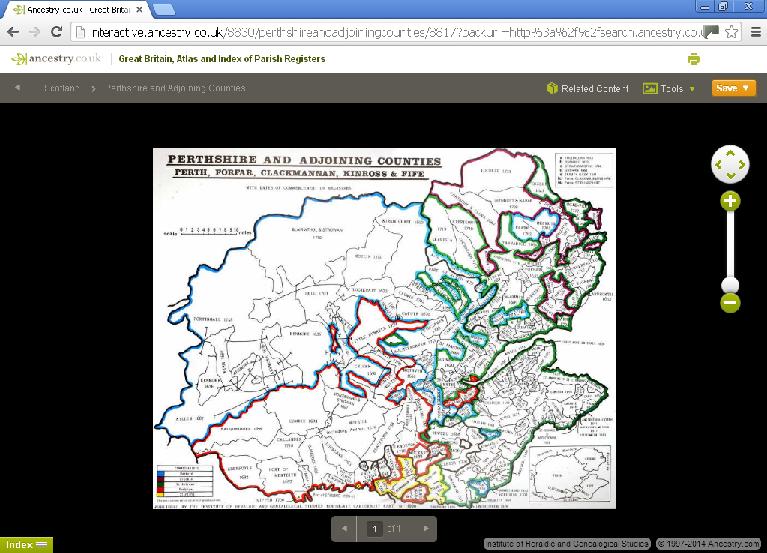 Although the collection title mentions indexes, the index pages from the book have not been digitised, only the maps themselves (in fact, these appear to have been digitised separately from the standalone maps on sale from the IHGS). Instead, the indexes have been made into a searchable database, allowing you to locate certain parishes via the search box. In the book, the indexes carry considerably more useful information per parish, including for England and Wales, the registration district it is to be found in, the coverage on the IGI, whether covered by Boyd's marriage index, and much more. The database, however, merely provides information on parish, county, country, map reference, if registers have been deposited, the registration district it was located within from 1837-1851, and the map reference. This last reference is not great though, in that there are no grids on the maps, as in the book, with Ancestry noting "The maps we have available do not have the grid printed along the sides. All maps have a grid range from A1 to M10, with the letters falling along the longest side."

A thoroughly useful collection. Although online, I would still recommend to those working professionally as genealogists that you buy a copy (though it is expensive), but for most folk, the online presentation of the collection is a huge release - check out where your ancestors lived, you may find that the landscape was not carved up quite as you imagined it.

Now available for UK research is the new second edition of the best selling Tracing Your Family History on the Internet: A Guide for Family Historians, whilst my new book British and Irish Newspapers is also now out. And FindmyPast - please reinstate the original Scottish census citations on your new site.
Posted by Chris Paton at 09:58