Scottish journalist and Newsnight presenter, Kirsty Wark, has teamed up with the Commonwealth War Graves Commission (CWGC) to launch a new initiative to get the British public to visit their local war graves and discover the stories behind the names of those who gave their lives in the First World War. 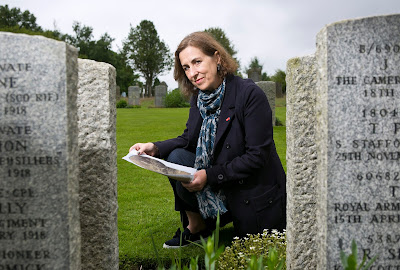 The CWGC is launching its Living Memory Project in Scotland to remember the forgotten front; the 300,000 war graves and memorials in Britain from both world wars, in time to mark the centenary of the Battle of the Somme (July 1).

The CWGC Living Memory Project aims to encourage community groups to discover, explore and remember their war heritage – with everyone in the UK having at least one war grave three miles from their front door.

In Scotland alone, there are more than 20,000 war graves and memorials commemorating men and women from the First and Second World Wars.

Kirsty Wark, ambassador for CWGCs Living Memory project in Scotland, said: “I have a very personal connection with the Battle of the Somme, as my Great Uncle, James Wark, fought for the entire 141 days of the battle. However, fighting during the Somme and for three years, he died from Spanish Flu just days after the Armistice in 1918.

“He had the most poignant letter in his kit bag, which the family now have, saying how much he looked forward to coming home. Sadly, as we know, he never made it, but thanks to the Commonwealth War Graves Commission, he is buried and remembered at the Ascq Communal Cemetery in France.

“The men who fought at the Battle of the Somme do so in some of the most horrendous conditions and saw many of their fellow comrades killed or badly wounded. We must never forget them, and instead remember these men by visiting their graves here in Scotland and finding out their stories.

“With more than 19,000 war graves in Scotland, I would encourage people to get together and explore their nearest war graves – find out about the person behind the headstone and remember them for the sacrifice they gave.”

CWGC has graves located in more than 1,200 locations in Scotland. The majority of men and women buried or commemorated either died in a British hospital of injuries sustained during the First World War or in the influenza pandemic that followed.

Remembering those buried in CWGC war graves in the UK is a fitting way to mark the Somme centenary.

Funding and creative resources are available to help groups identify a CWGC war grave near where they live. This can be to help towards researching about some of those buried locally and to stage a commemorative event.

Any community group interested can register now by emailing livingmemory@cwgc.org or visiting www.cwgc.org/livingmemory.

CWGC Director of External Relations, Colin Kerr, said:“The overseas work of the Commonwealth War Graves Commission’s is well known, but here in the UK, there is little awareness of the graves and memorials to be found in a more than 12,000 locations that commemorate more than 300,000 Commonwealth war dead of the two world wars.

“We believe this is wrong, and through the Living Memory Project aim to reconnect the British public to their commemorative heritage on their doorstep.

“With the support of the DCMS, the Living Memory Project will encourage more people to discover and visit our war grave sites and remember the war dead in those places from the First and Second World Wars. We want them to share their stories and raise awareness with their wider communities.”

(With thanks to the CWGC)

For details on my genealogy guide books, including A Decade of Irish Centenaries: Researching Ireland 1912-1923, Discover Scottish Church Records (2nd edition), Discover Irish Land Records and Down and Out in Scotland: Researching Ancestral Crisis, please visit http://britishgenes.blogspot.co.uk/p/my-books.html.
Posted by Chris Paton at 10:52