TheGenealogist has just launched a new collection of British telephone directories. Complementing the early UK Telephone Directory from 1899-1900 that is already available on TheGenealogist, this new release includes the 1907 Post Office National Directory which adds a resource for finding names and addresses before the 1911 census. This directory was published at a time when the telephone was becoming more important to our ancestors. The Post Office's first coin-operated call box had been installed at London’s Ludgate Circus just the year before, and Trunk (long distance) telephone charges were reduced to half-price for telephone calls made after 7pm and before 7am. 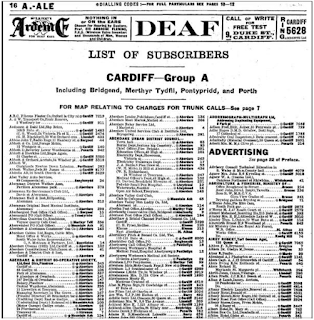 In addition, and at the same time, TheGenealogist has released the 1938 South Wales District Post Office Telephone Directory. The big contrast between this and the earlier directories are that so many more ordinary people had become telephone subscribers. For this reason the directories were by now split up into regions to cope with the large number of names and addresses.

* Containing names and address details for subscribers the telephone directories are a useful resource for discovering ancestors who had a phone
* Find private names and small businessmen’s addresses. If your ancestor worked as a fishmonger, butcher, ironmonger or bootmaker, then all these and more feature in the fascinating records.
* The difference between the turn of the century directories and the 1938 South Wales District Directory is marked by the number of new telephone subscribers, so making it possible to find many more ancestor’s names and addresses.

TheGenealogist has also just released online the United States WWII Prisoner of War records to compliment those that are already online for British and former Empire Prisoners of War of the Germans in WWI and WWII.

* These new records reveal the names of U.S. military as well as U.S. and some Allied civilians who were prisoners of war and internees
* Covering the years 1942 - 1947, Prisoners of both Germany and Japan are included in this collection
* The record for each prisoner provides
* Name
* Casualty status
* Rank
* Service number
* PoW camp
* Regiment, branch of service or civilian status
* Home town or place of enlistment
* Date reported
* Race
* State of residence


In another record release TheGenealogist have added over 37,450 individuals to their Baptism Transcripts for Worcestershire in partnership with Malvern Family History Society, expanding their coverage and bringing the total to over 2 million individuals. These records range from the years 1544 to 1891.

For details on my genealogy guide books, including A Decade of Irish Centenaries: Researching Ireland 1912-1923, Discover Scottish Church Records (2nd edition), Discover Irish Land Records and Down and Out in Scotland: Researching Ancestral Crisis, please visit http://britishgenes.blogspot.co.uk/p/my-books.html.
Posted by Chris Paton at 19:47