* A NEW genealogy tool - people researching their family will be able to find out so much more information about their ancestor’s unit manoeuvres during battle, see where they moved to and listen to what happened at each location.

Giving more details of army ancestors who served in the Great War of 1914-18, movements of his battalion, where he embarked, which battles he would have fought in, and in which locations and on what battlefronts he may have served. Specialist military genealogy website Forces War Records created this new function.

The ORBATS data, transcribed by Forces War Records, was used to produce this ‘moving’ audio-visual interactive map, which tracks step-by-step the progress of units throughout the course of the war, from the opening battle at Mons to the closing stages of the Spring Offensive and the Armistice. Pinpoint exactly where a unit was on a given date and trace the battles, actions and events it took part in, whilst listening to an account of the action that took place at each location.

The specialist data team has been working for 2 years to transcribe the official ORBATS, published by His Majesty’s Stationery Office, as well as numerous official histories of the Great War, to help create this in-depth record of military operations and engagements by the British Army.

These are documents produced by the military that outline the hierarchical structure, command organisation and disposition of units for particular engagements undertaken by the Commonwealth and British Armed Forces. At the highest level they present a breakdown of the units involved in wider conflicts, the First World War in this case, including the names of divisional and brigade commanding officers and details of the organisation of the divisions, right down to battalion level, along with their attached units, for example from the Royal Artillery. 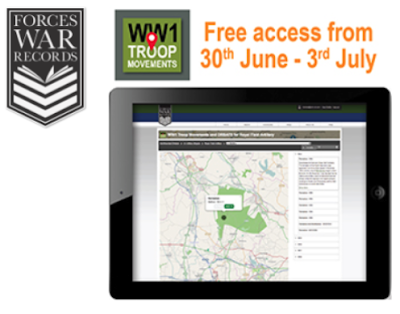 For details on my genealogy guide books, including A Decade of Irish Centenaries: Researching Ireland 1912-1923, Discover Scottish Church Records (2nd edition), Discover Irish Land Records and Down and Out in Scotland: Researching Ancestral Crisis, please visit http://britishgenes.blogspot.co.uk/p/my-books.html.
Posted by Chris Paton at 18:37