From the North of Ireland Family History Society (www.nifhs.org):

Posthumous presentation to family of late Randal Gill to mark his election as a Fellow of the Irish Genealogical Research Society – recognising his decades of dedicated service to the genealogy community in Northern Ireland and further afield. 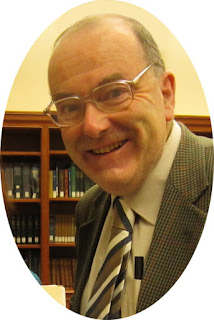 On Saturday, 18th June 2016, at the Library and Research Centre of the North of Ireland Family History Society (NIFHS) in Newtownabbey, a posthumous presentation was made to the family of the late Randal Gill, a founder member and former President of the Society, to mark his election as a Fellow of the Irish Genealogical Research Society (www.irishancestors.ie) which he had been a member of since 1982. The Award of Fellowship was made to recognise Randal’s outstanding contribution to genealogy across the province of Ulster.

Without doubt, Randal is recognised in Irish genealogical circles as having made an immensely significant contribution to the development of Ulster genealogical knowledge and resources for over forty years. Randal‘s pursuit of family history began in 1967 when a cousin from Australia visited Northern Ireland and together they began to research the family of Randal’s mother. This soon ignited his interest in the Gill family and thus began a lifelong fascination of genealogy and family history.

In 1979, Randal was one of the founding members of the North of Ireland Family History Society, serving in various roles, including twice as president of the Society. His enthusiasm for Ulster family history drove him to be a most generous individual with his time and knowledge. He thought nothing of travelling the length and breadth of the North of Ireland, attending NIFHS branch meetings and giving informative talks, which were often highly entertaining. His biggest contribution to the NIFHS was the building up of its library to be one of the most important resources for Ulster genealogy and local history. It was fitting then, that after his untimely and sudden death in 2012, that the NIFHS named their library 'The Randal Gill Library'.

At the event, IGRS President, Fergus Gillespie, former Chief Herald of Ireland, said: “Our pleasure in recognising Randal Gill’s unique contribution to Irish genealogy in early 2012, with his election as a Fellow of the IGRS, was overtaken by sadness when we learned of his premature death so shortly afterwards. Randal’s work in promoting Ulster genealogy and the North of Ireland Family History Society was unrivalled. He was without doubt a most knowledgeable and generous individual and a man most deserving of this Fellowship.”

Ann Robinson, NIFHS president, said “Randal was for years a vital part of our Society and his sudden death in 2012 was a great loss to us, as both a committed member and as a friend to so many. We are very pleased that Randal's family are here with us today to accept the Fellowship on his behalf. It is wonderful that this presentation recognises his important contribution to family history across the North of Ireland for over four decades. His legacy lives on in a network of family history branches and in the library materials that are available to family and local history researchers worldwide.” 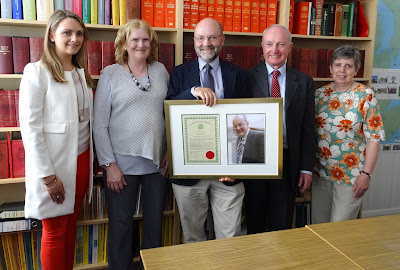 (With thanks to the NIFHS)

For details on my genealogy guide books, including A Decade of Irish Centenaries: Researching Ireland 1912-1923, Discover Scottish Church Records (2nd edition), Discover Irish Land Records and Down and Out in Scotland: Researching Ancestral Crisis, please visit http://britishgenes.blogspot.co.uk/p/my-books.html.
Posted by Chris Paton at 11:17