There's a Book and Map fair being held on June 4th 2012 at the Battle of the Boyne Visitor Centre at Oldbridge in County Meath, with talks from Ted Green and Noel French on the history of nearby Drogheda. For further details see www.battleoftheboyne.ie/NewsEvents/Title,18595,en.html.

In 1997 I worked as a researcher on a documentary about the Battle of the Boyne for the BBC series War Walks, presented by Richard Holmes. At that point, I think the idea of a Boyne visitor centre would have raised many an eyebrow - instead, a small production crew of just six of us had to research the area like confused Jacobites! There was also only one Jacobite re-enactment society at the time, the Sligo Living History Society, so in classic BBC tradition we got them to play both sides of the conflict for the re-enactment. It was a great week's filming, with the late great Richard teaching me how to fire a matchlock musket, a skill I had hoped to take back to Ashby-de-la-Zouche in order to perform revenge against a scoundrel in the Sealed Knot who accidentally shot me with his musket at a civil war re-enactment for the previous programme! (Typical - I lived in Northern Ireland for years, never saw anyone say boo to a goose, then went to England and got shot by an eejit in costume...).

I had no idea the Boyne battlefield was now a big tourist attraction - I'll need to take my boys over to have a look, it's a beautiful part of the country!

Here's the great man himself pretending to be King Billy on his trusty steed... 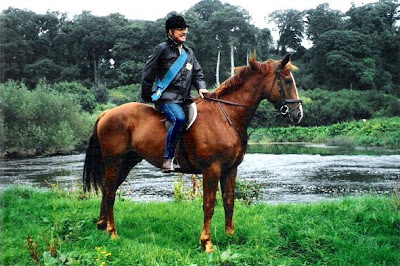 The guv'nor beside the Boyne 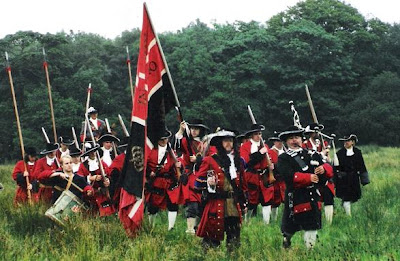 The good folk of Sligo