Remember when FamilySearch (www.familysearch.org) had us in Europe? There we were, happily munching onions, eating escargots, frankfurt and spaghetti, when without so much as a by-your-leave, they came along and kicked us out, achieving what no Tory politician had ever dared to do. A people seemingly without an identity, we strolled merrily on our longboats and car ferries through the North Sea (or is that the German Ocean?!) and thus did we settle to form the British Isles, a happy new category on the website. 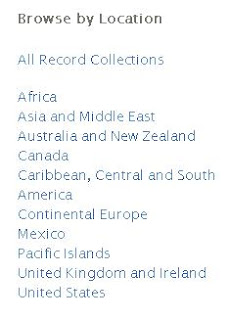 But a restless people we must be, for now we have been redesignated once again, this time to a new category, the United Kingdom and Ireland.

Of course, that means Northern Ireland should be well covered!

Think of the fun and games that will ensue if Scotland chooses to go independent in two years time. The SNP may need to think this one through a bit more...! lol :)

Going off now to have a minor identity crisis....