I've spent the last 2 days in Edinburgh at the National Records of Scotland (www.nrscotland.gov.uk) chasing up 17th Century writs, sasines, court of session records, retours and more for one of the more interesting cases I've worked on in a while. Elsewhere, there's been a few developments at the facility worth explaining, both recently and soon to come. 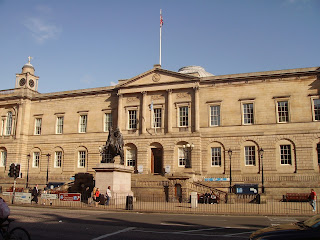 I should explain that for the first hour and a half yesterday, I probably experienced my worst ever time at the facility, setting me up for the day like bear with a sore head, though thankfully not for long. I made the mistake of forgetting my ID card. Previously if this happened the archive would issue a temporary card, but now they won't do that, and so having forgotten the card, my only option was to go across the road, pay £5 to have passport photos taken, and then return to have a new card issued. It is seriously ludicrous system, because they have my details (including my photograph), and even told me I could use a computer to look at digitised records, but that to order documents I would need a card - in other words, security was not the issue, but bureacracy. Considering it had taken me 2 and a half hours to get there already, I was delayed for another 45 mins before I could even start. When I then ordered documents to be produced I had to wait over an hour, instead of 5-10 minutes for it to arrive - computer error apparently. So planning on a 10am start, I finally got cracking just prior to midday.

Thankfully, from then on the staff could not have been more helpful, with particular orders of merit for Robert, Lorna and Stephanie, who went above and beyond the call of duty on all sorts, both yesterday and today. Robert was brilliant in helping to improve the set up to allow me to take better digital photos, Lorna was great in helping to produce documents that were technically away being used for an order production - the team even managed to locate and obtain a sasine minute book for me which has been away for conservation for 2 years. And Stephanie was a great tutor on locating Court of Session records! Top archivists.

In terms of news, all sorts. It turns out the digitised kirk session records collection on ScottishDocuments (accessible at various archives across the country) is not as complete as that at the NRS - most CH2 volumes are there, but various issues to do with catalogue changes and volumes digitised after the Scottish Documents project ended mean that the NRS has a more complete set. It also looks as if kirk session records may be going onto a different platform than ScotlandsPeople, when made available online, but more on that in due course. ScotlandsPlaces (www.scotlandsplaces.gov.uk) is also one to keep an eye on - Ordnance Survey field books will be joining the site soon, which is a VERY exciting development! And a few other collections, including more tax records...!

I also had previously reported some time back that most records could be photographed now in the Historic Search Room, with the exception of Gifts and Depositis. in fact, that is not quite accurate, as some of these records can also be snapped, as I discovered to my delight yesterday - so it always pays to ask on the GD records, as they keep a folder at the main desk listing the exemptions.

Finally, some news for those planning a visit shortly - productions of records held at West Register House are to be suspended from June 4th to July 27th. This is because the lift in the building is being replaced.

UPDATE: Forgot to mention - Valuation Roll updates to ScotlandsPeople look like they will be made quarterly.


British GENES is also on Facebook at www.facebook.com/BritishGENES and Twitter @chrismpaton Check out my Scotland's Greatest Story research service www.ScotlandsGreatestStory.co.uk
New book: It's Perthshire 1866 - there's been a murder... www.thehistorypress.co.uk/products/The-Mount-Stewart-Murder.aspx (from June 12th 2012)
Posted by Chris Paton at 17:04