Review - Arrivals in Australia from 1788, by Kerry Farmer

It's been three months since the Unlock the Past (www.unlockthepast.com.au) run genealogy cruise that I worked on as a speaker (see http://britishgenes.blogspot.co.uk/2015/07/unlock-past-baltic-genealogy-cruise_94.html), and one thing I have utterly failed in so far since my return is to upload some reviews of some of the Unlock the Past guide books that fellow genies have written and published through the company. I picked up a few, and so I really should review them before anyone starts thinking of second editions! Without further ado then, here comes the first... 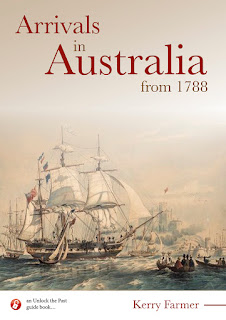 I attended some of Kerry's talks on a previous cruise last year, and she is definitely amongst my fave top ten genies as speakers - the impression I got was that what she doesn't know about the subjects she covers just isn't worth knowing! In this chunky guide book Kerry starts in the first chapter by providing a comprehensive introduction to depict the methods by which folk migrated to Australia - convicts are just a mere part of the story, with assisted passage an equally popular method of travel, not to mention those travelling for work, not least the military. She also discusses records of naturalisation, passports (compulsory from 1920 for all Ozzies to travel), and other resources, including records of births at sea en route down under. The next three chapters then focus specifically on the tales of convicts, ships' crew members and those in military service, before chapters 5 to 11 look at the individual colonies, and chapter 12 the Commonwealth of Australia. These chapters follow a similar structure, with discussion on immigration history, ships list, websites for research, and more.

A glossary is then followed by four appendices, two of which are particular fun, namely an Immigrants Guide transcribed from 1853 (first published in a Liverpool newspaper), detailing the clothes that immigrants should pack, and a copy of the Passengers Act of 1855, detailing how folk should be detailed aboard ship when sailing to their new lives. The remaining appendices provide a list of useful books and websites for research.

Kerry's book is fair size for a UTP guide book at 140 pages long, and is a wonderfully useful go to illustrated guide, one that I know will be of immense use in years to come. It has some nice touches, such as a graphic on page 15 depicting when each of the Australian colonies was founded - that's probably wee buns on the knowledge stakes to those based down under, but a Godsend for johnny foreigners like me still trying to work out which bit of Australia goes where and when! Thoroughly recommended.

Prices quoted and links above are to the print editions of the book available from suppliers in Australia, Canada and here in the UK. Ebook editions are also available via Gen-eBooks at www.gen-ebooks.com.

For details on my genealogy guide books, including my recently released Discover Irish Land Records and Down and Out in Scotland: Researching Ancestral Crisis, please visit http://britishgenes.blogspot.co.uk/p/my-books.html. My Pinterest account is at https://www.pinterest.com/chrismpaton/.
Posted by Chris Paton at 20:40