*Warning - for those who have yet to see the latest episode of Who Do You Think You Are?, this post does contain spoilers* 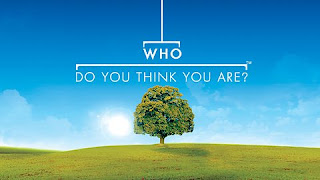 I have just finished watching the latest episode of Who Do You Think You Are?, featuring a television presenter called Anita Rani. It was a thoroughly absorbing and emotional watch, as Anita traced her grandfather's story back to the time of Partition in India, in 1947. Her family connections to the Punjab region were explored, and the shocking tale of how at Partition some members of different religious communities murdered their own daughters to stop another group taking them and raping them was exposed, a truly horrific tale that understandably left Anita, and perhaps many watching, in tears.

It was truly horrific, but there was one question I had that deeply troubled me after, which, equally horrific as it may sound, I'm not at all sure was addressed (and I have watched the relevant section twice now - the programme is on the iPlayer at http://www.bbc.co.uk/iplayer/episode/b06fv8wf/who-do-you-think-you-are-series-12-8-anita-rani). The programme suggested that many folk murdered their own daughters, and that many women died by throwing themselves into wells etc. We know from oral history that Anita's grandfather's first wife, Pritam Kaur, was said to have done just that, and that both her son Raj and Anita's great grandfather were both hit by spears as they retreated to India. But amongst all of this was the shock discovery of an unknown daughter to Pritam, called Mahindra, who was six years old at the time of Partition, and yet there was little to no mention of this daughter's fate - all that was mentioned was that nobody in Anita's family knew about her (and there is certainly no reasons to suggest otherwise that this was indeed the case).

But this is what is slightly troubling me. The programme had already gone to some lengths to discuss the barbarity of what was done to young daughters in that time, but the question was never explored further - who killed Mahindra? This was clearly because no documentary evidence was found to suggest how this happened (at least, that is how it was presented in the programme, and we can only go by the evidence presented on screen). But from what was previously raised in the programme, is it not at least conceivable, as perhaps one of many possibilities, that her death could have been caused at the hands of her own family, as much as it might have been by those from another community? If so, that would certainly be an even more shocking conclusion to the programme than was presented.

As a former programme maker myself, when something so obvious is omitted, that rings alarm bells with me. We may never know what truly happened to Mahindra, but in family history research, we should always be prepared to discover things in our background that may hurt us as much as heal us. The questions we may ask of our ancestors may be offensive to us, they may appal and even upset us, but those questions still need to be asked if we truly want to understand what motivated them in their actions. Whether they should be asked in the full view of the British public is perhaps quite another question. But in this case, the absence of the question at least being raised in passing in the programme as presented (and again, I have to reiterate that it may not have been the case at all) may have put a spin on proceedings as eventually shown. I do wonder if an executive producer perhaps had a hand in there saying let's not go too much further down a potentially darker road? Was it perhaps decided to simply leave that question to hang in the air, for others to ponder after transmission?

Nevertheless, in terms of how the story cast a light on that time in 1947, it was a superb piece of television, covering a period of which I had only a little knowledge. Well worth watching.

NB: For some bizarre reason, the BBC in Scotland seems to have moved Who Do You Think You Are to another BBC1 slot on Monday nights, rather than the Thursday night BBC1 slot being utilised by the rest of the union. If you want to watch the Thursday night edition, you can do so online via the live function of the iPlayer, or access one of the other BBC1 regions from the UK via your Sky box, if you have one!

For details on my genealogy guide books, including my recently released Discover Irish Land Records and Down and Out in Scotland: Researching Ancestral Crisis, please visit http://britishgenes.blogspot.co.uk/p/my-books.html. My Pinterest account is at https://www.pinterest.com/chrismpaton/.
Posted by Chris Paton at 13:55