A Scottish family tale from my other wee blog, first published in July 2011:

I haven't blogged about one of my family heroes in a while - so here's another episode from the life of the incredible Doctor William Henderson of Perth (1784-1870), brother to my four times great grandfather Andrew...

In 1820, Dr. Henderson gained some notoriety as being the doctor who successfully delivered one of the first surviving babies in Scotland by a caesarean section. Although the procedure had been known to have been carried out elsewhere in Scotland prior to this, only a handful of children had been known to survive the procedure, perhaps most notably Robert II in 1316. The pregant mother in this instance was 30 year old Elizabeth Miller, spouse of David Low. The following account from the Perth Courier of October 5th 1820 describes what happened:The Caesarean operation was performed here on Saturday last, by Dr Henderson, in presence of six of his professional brethren. The patient being much deformed, and in a reduced habit of body, survived the operation only about 24 hours. The child, a fine girl, is doing extremely well. We understand that this is about the 24th time this operation has been performed in Great Britain, and that only one or two have survived it. Of the 24 children, only 11 have been brought into the world alive. Much praise is due to the medical gentlemen who assisted in this distressing case, two of them having constantly attended by turns on the patient, during the whole time she was alive.


The baby girl was christened as Caesar Anna Miller Low, with the Perth baptismal record noting that she had been 'brought forth by the Caesarean Operation':

The case was an important success for its time, which William subsequently wrote up later in the year for publication within the Edinburgh Medical and Surgical Journal, under the title of "History of a Case of Impractical Labour, in which the Caesarean Operation was Performed". (Ed. Med. and Surg. Jour., vol.xvii.p.105, 1 NOV 1820). In his account William noted the following: 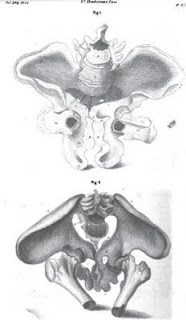 All circumstances rendered the case of this unfortunate woman a most hopeless one. She had laboured under mollities ossium for eight years, and, for the last four, had been chiefly confined to bed, and could not move her body from the position in which it was laid without assistance. Her appetite was much impaired, extreme emaciation, and great deformity. When she was viewed in bed, previous to the operation, her appearance was more like that of an Egyptian mummy than that of a human creature who lived and breathed.

This is now, I think, the 24th time that the Caesarean operation has been performed in Great Britain; one woman out of that number has been saved, but 12 children have been preserved.

He also noted that Elizabeth Low was aged 30 and had been twelve years married, with three living children, the last of which had been born in 1814. Images of her pelvis were included in the article, having been drawn following the mother's autopsy.

In a postscript in the article he adds the following about Caesar Anna - 'A fine full grown female infant, who is doing remarkably well'. He also adds that 'it was a case in which no alternative was left; had it not been recourse to, both lives must certainly have been lost'.

For more on how to research the more unfortunate episodes of our ancestors' lives, my book Down and Out in Scotland: Researching Ancestral Crisis may be of interest. Here's the blurb: 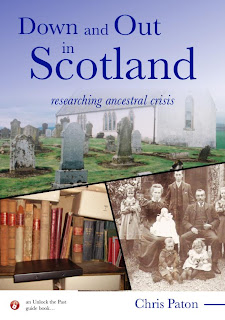 It is perhaps one of greatest truisms of family history research that we will often find that the lives of our ancestors were best documented when the chips were truly down.

There were many battles that our forebears fought for and against in Scotland, both on a personal level and a part of the society within which they lived. There were the laws of the local parish church and the punishments awaiting those who breached kirk discipline; the struggles to avoid poverty and the stigma of being a debtor; the darkest moments of the soul, from mental health issues and illness, to murder and suicide; and the dramatic moments of rebellion, when our forebears drew a line in the sand against a perceived tyranny or democratic deficit. Illness, death, bigamy, abandonment, accidents, eviction, ethnic cleansing - a dramatic range of challenges across a lifetime, and at times, outright tragedy. And close to each of them, a quill and ink.

But through all of these episodes, there is an even greater story that emerges, of how our ancestors overcame such struggles. In this Unlock the Past guide, genealogist Chris Paton goes in search of the records of ancestral hardship in Scotland, to allow us to truly understand the situations that our ancestors had to endure and overcome across the generations, to hep us become the very people who we are today.

For details on how to purchase a copy in the UK, Canada or Australia, please visit http://britishgenes.blogspot.co.uk/p/my-books.html.

For details on my genealogy guide books, including my recently released Discover Irish Land Records and Down and Out in Scotland: Researching Ancestral Crisis, please visit http://britishgenes.blogspot.co.uk/p/my-books.html. My Pinterest account is at https://www.pinterest.com/chrismpaton/.
Posted by Chris Paton at 17:26