From The Genealogist (www.thegenealogist.co.uk) records platform:

TheGenealogist has just released five million Emigration BT27 records as part of their growing immigration and emigration record set. Uniquely TheGenealogist allows you to track transmigration of people across countries routing through British ports on their way to America. TheGenealogist is the only website with the facility to discover families travelling together on the same voyage using our SmartSearch technology. 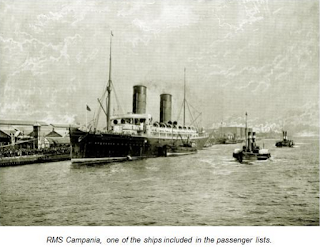 The new records contain the historical records of passengers who departed by sea from Britain in the years between 1896 and 1909. These new records significantly boosts the already strong Immigration, Emigration, Naturalisation and passenger list resources on TheGenealogist.

TheGenealogist has further revealed that these records will be shortly followed by the release of many more unique migration records.

The searchable records released today will allow researchers to

* Find people using British shipping lines and travelling to places such as America, Canada, India, New Zealand and Australia in the Passenger lists of people leaving from, or passing through the United Kingdom, by sea which were kept by the Board of Trade's Commercial and Statistical Department and its successors.

* The Homestead Act of 1862 in America gave free land to settlers who developed it for at least five years, and became a particular magnet for Norwegians, Danes, and Swedes, who arrived in their millions. To reach America, it was necessary to travel initially to England in order to then board one of the large transatlantic passenger ships and this preliminary journey has been recorded for many transmigrant passengers within the BT27 records. For the first time these can be easily found using the unique transmigration button.

* SmartSearch identifies potential family members travelling together. When our system recognises groups of people on the same voyage as a potential family it displays a family icon. This then allows you to easily view the family.

This release adds to TheGenealogist’s Immigration and Emigration records that already include the useful Naturalisation and Denization records.

Those with ancestors who travelled out of Britain will welcome this fascinating new release from TheGenealogist that reveal the details of the coming and going of passengers and is a precursor of a set of unique records joining the collection shortly.

For details on my genealogy guide books, including my recently released Discover Irish Land Records and Down and Out in Scotland: Researching Ancestral Crisis, please visit http://britishgenes.blogspot.co.uk/p/my-books.html. My Pinterest account is at https://www.pinterest.com/chrismpaton/.
Posted by Chris Paton at 11:29