The second Unlock the Past (www.unlockthepast.com.au) book under review then is Paul Milner's useful guide to English census records... 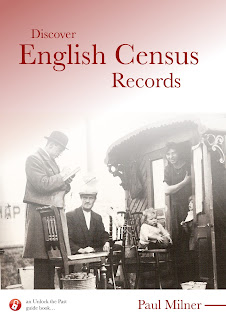 I met Paul for the first time on the cruise, and attended and enjoyed several of his presentations whilst there. Considering he has already reviewed several of my books, it's only fair I now return the favour! In fact, what I like about Paul's English research themed books is that they try to accomplish the same things that I have been trying to do with my own Scottish and Irish titles for the company, and that is to take one subject and to well and truly go to town on it, going beyond the basics but sticking very much to the brief of the subject in hand.

Paul's census book is a classic case in point, being very much about the English census only, so Wales, Ireland and Scotland do not get a look in at all - I quite like that, because, for example, a discussion of the Irish census alone would probably merit another book in its own right. He starts with a brief introduction on how to effectively use his book, before starting off with the one thing any good research guide needs - a bit of context. The opening chapter defines what a population census actually is, before exploring the history of the English census from 1801, and the changes implemented to the exercise from 1841 onwards.

The background sorted, the 1841 census then gets a bit more of a treatment in its own right, understandably as it was a somewhat odd half way house between the purely statistical returns of the earlier censuses, and the later enumerations which recorded so much more detail. A walk through of key features from the censuses from 1851-1901 is covered in the next chapter, followed then by a chapter on the 1911 exercise, which survives in a much more complete form than the earlier collections (with the original household schedules having survived). Paul then looks at how to access the censuses online, before discussing special situations for unique groups such as sailors, soldiers, night workers and institutions, leading nicely into a case study showing you how to locate your ancestor house on the ground, with the use of maps and the first descriptive page from the census return as drawn up by the enumerator, detailing the route to be taken. Subsequent chapters then examine the Histpop website (where the published census reports can be found), some trouble shooting tips, and a glimpse to the future with the 1921 census, and the forthcoming 1939 National Register Act returns.

A concise overview of a subject that leaves no stone unturned, this is another great addition to my family history bookshelf.


Prices quoted and links above are to the print editions of the book available from suppliers in Australia, Canada and here in the UK. Ebook editions are also available via Gen-eBooks at www.gen-ebooks.com.

For details on my genealogy guide books, including my recently released Discover Irish Land Records and Down and Out in Scotland: Researching Ancestral Crisis, please visit http://britishgenes.blogspot.co.uk/p/my-books.html. My Pinterest account is at https://www.pinterest.com/chrismpaton/.
Posted by Chris Paton at 20:40

Email ThisBlogThis!Share to TwitterShare to FacebookShare to Pinterest
Labels: books, censuses, England, Unlock the Past