Here's some exciting news that I've been champing at the bit to announce for a couple of weeks!

One of the biggest ever records releases for Ireland finally gets underway today with the first phase of the Irish Petty Sessions registers from 1851-1910. These are the records of the lowest court of the land and the Irish equivalent of the English Magistrates Court.

What was the Petty Sessions Court?
These were the lowest courts in the country, which dealt with the vast bulk of lesser legal cases, civil and criminal. The Court was presided over by two or more unpaid Justices of Peace, or by a single paid (stipendiary) Magistrate. Judgements were made summarily by the JPs or Magistrate. In other words there was no jury. Each Court met daily, weekly or monthly, depending on the volume of cases to be heard. Every Court had a Clerk who kept the registers that are published here, and collected fees from those involved in cases. This system is still in place in Northern Ireland and Britain and usually referred to as the Magistrates Court. In the Republic the courts were replaced by the District Court in 1924.

Brian Donovan from FindmyPast Ireland very kindly sent me an example of the records a couple of weeks ago, which is presented below. The records typically contain the following: 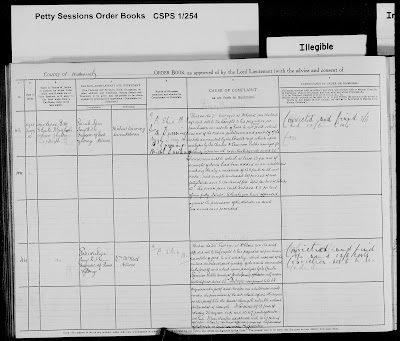 It is important to note that records for Northern Ireland are not included, and that this is only the first phase of records for the south, with some 1.2 million entries - a further 15 million records will be released throughout this year. A list of what is available for the Republic is currently available at www.findmypast.ie/content/petty-sessions-order-books along with further details about the collection. The first batch is particularly useful for those with relatives in Connaught or Donegal.

The following is the section on source information from the site:

What records survive?
There are very few registers which pre-date 1851, and none for Dublin city, Dun Laoghaire (Kingstown), and some other districts either because they were excluded in the 1851 act, or because the records do not survive. Most surviving records for the Republic are held by the National Archives of Ireland. This is the source for most of the records that currently appear on this site, and will do in the future. Other records are held privately or by local libraries and we hope to include them as well. The records for Northern Ireland are either held by the Public Record Office of Northern Ireland or still reside in the court houses. We hope to digitise these too.

Have fun, and happy hunting!