I've picked up all sorts of gleanings from the WDYTYA Live event, so here's a quick summary: 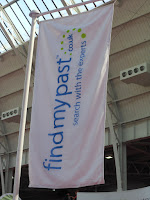 In discussions with both Brian Donovan and Debra Chatfield I have learned a few things on the FindmyPast front, both UK (www.findmypast.co.uk) and Ireland (www.findmypast.ie). The first Welsh parish registers will be going online within the next couple of weeks on the UK site, and the 1901 Scottish census in the very near future in transcription format. Future developments will include Kilmainham Army pension papers and records of the Royal Irish Constabularly, as held at the National Archives at Kew, and possibly some additional tie-ins from Ireland. Obviously on the Irish site the big launch just now is the Petty Session records which will be continued throughout this year. There will also be a new improved version of the family tree programme on the sites very soon.

The new unified FindmyPast platform, comprising data from the British, Irish and Ozzie sites, will NOT be a basic site with bolt on packages as I have previously reported in November of last year (as with GenesReunited), but will actually be very similar to the Ancestry model with a new worldwide subscription introduced. This will include the three current FindmyPast sites (and presumably the USA when it gets going) as well as the British Newspaper Archive. You will still be able to access individual sites though if you choose not to go for a worldwide sub.

The Public Record Office of Northern Ireland website at www.proni.gov.uk will be having a bit of a facelift soon, and a MAJOR resource for the north is currently being worked on just now, though likely not available this year. In addition the street directories part of the site is gong to have a bit of a revamp in terms of the user interface, and the online wills coverage will likely be extended to 1950 sometime this year.

MyHeritage (www.myheritage.com) will shortly be announcing a new calendar feature where you can order up printed calendars derived from the date hosted in your profile. I had a great chat with Gilad Japhet, CEO of MyHeritage at the event, in which he outlined how the company was started, and how he has been able to predict how the business will develop using tools such as Google Trends (www.google.com/trends/). He's also given me some interesting insight into the state of the competition, and some prediction which I won't share but which I will be interested to see if they come true! And thanks to MyHeritage's Laurence Harris for the loan of a media pointer on Friday when mine failed just minutes before my first talk!

TheGenealogist (www.thegenealogist.co.uk) has not only completed its indexing for the 1911 English and Welsh census, it is about to add images of the unredacted documents for that same census. A new global search is also now available on the site. 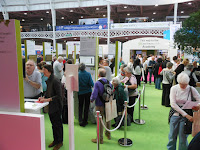 I checked with Ancestry (www.Ancestry.co.uk) and there is no sign of unredacted images there as yet, but there is news of something big happening soon for those north of the border, so watch this space!

Michael Leclerc, Chief Genealogist with Mocavo.com, is currently working on a book about Benjamin Franklin!

Scottish Valuation Rolls for the year 1915 are coming very soon on ScotlandsPeople (www.scotlandspeople.gov.uk).

DeceasedOnline (www.deceasedonline.com) will also be adding more records for another authority in the north of England soon, and hopes to have a Scottish authority available soon also, as well as more burials inscriptions from Scottish Monumental Inscriptions (and with a bit of a revamp on their access).

Belfast City Council has updated its online burials database for City Cemetery, Dundonald and Roselawn to crucially allow you to search by lair number also - this means if you find someone buried in a particular cemetery, you can now search to see who else is also in the same lair - see www.belfastcity.gov.uk/burialrecords/search.asp

I've had the provisional nod also that another book title from yours truly has been agreed by the relevant publisher - hope to announce more soon!

If you picked up on anything else from the event, please do let me know in the comments section below! :)