This is an updated blog post originally from my Walking in Eternity blog. There are many Irelands in Ireland today - this was mine over 30 years ago:

Last year I visited my home town of Carrickfergus for the first time in years. I was born in Northern Ireland in 1970, although with my father in the navy it was not until I was 8 years old that I actually went to live in the country, having left when just a couple of days old to reside in Helensburgh and then Plymouth. This was my first visit back home in seven years, but although my main reason for going was to see the new PRONI building and to do some research in some Belfast cemeteries, I managed to get in a couple of hours research at the library in my home town of Carrickfergus.I decided to look through some old editions of the weekly newspaper, the Carrick Advertiser, from 1980-1982, really to see if I could find any stories concerning my family. I successfully located an image of myself and my brother in a primary school choir, and several of an aunt winning golf tournaments.

There was one discovery that really came as a surprise though. I'm sure everyone is aware that Northern Ireland spent 30 years going through the Troubles. In 1979, when I moved back to Carrick, I had no idea about the Troubles, I was a kid who had grown up in Britain - I had no idea my family were all Protestants, as I had no idea what the word actually meant - growing up as a kid first in Scotland and then in Plymouth in England I'd never heard it before. We returned to Carrick after my parents separated, and after the death of my gran. My father inherited her house in a part of the town called Joymount - it had only one tap in the house with cold water (hot water had to be boiled in a big pot on the gas cooker!), no bathroom, no washing machine (we had to use the sink and then a mangle!) and an outside toilet, and we stayed there for two years. Ironically, on my visit last year I noticed a tourist brochure for one of the adjacent houses that showed it was now a holiday home that was available for hire for something like £600 a week!

One night, aged 11, I remember suddenly waking up in my bedroom in the middle of the night and going to the window to peak outside. There was a car park outside about fifty yards away, facing the library, and around a car was the British Army. Not all of them mind - it was the bomb squad. I watched absolutely fascinated as a small robot was driven over to the car from where the soldiers were deployed, with police cars nearby with blue globes flashing, all an extraordinary sight for an 11 year old kid half-asleep! My dad came in and told me to get back into bed; he may have possibly even moved us into a back room, I can't remember.

In the library I came across a newspaper article about this very incident. The car, it transpired, was a Ford Cortina, and had been hijacked at the Royal Victoria Hospital in Belfast a month before. It had suddenly been spotted in this Carrick car park, and being suspiciously parked the standard response was to get the army out to perform a controlled explosion on it, in case it was actually carrying a bomb. It only occurred to me yesterday whilst reading the piece that nobody actually knocked on our door to tell us that there might be an IRA bomb just fifty yards from the house! The whole operation lasted 3 hours and 20 minutes, all over by 5am. The article also showed a picture illustrating what happens when you park a car badly... 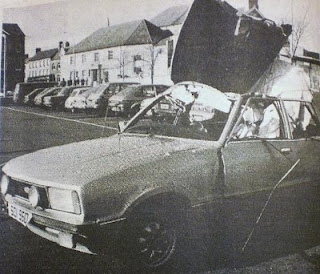 The Troubles did occasionally hit Carrickfergus when I was there. The papers ran the occasional funeral report of an RUC (police) officer from the town being killed in another part of the Province, but nothing else ever really seemed to happen if you believed the press. The papers were instead more filled with ridiculous bickering between the borough's politicians, often on thinly veiled sectarian or class based issues. They were also extremely sexist! Lots of "Lovely Lady of Kragfergus" competitions, women posing in football tops when the boys were going off to play, and more. And religion. My God, if ever a place was contaminated by self-opinionated men of the cloth, it was Carrickfergus! One minister wrote often in the paper to basically tell us how evil we all were - he actually carried out my Gran's funeral ten years ago and spent 5 minutes telling us who she was (getting just about every detail wrong) and then an hour telling us why we were all sinners and needing to repent!

Whilst the national press would have of course focussed on a Troubles based story every day, in a local paper like the Carrick Ad, you got a different image. A tiny, quiet wee community just 9 miles from Belfast, more worried about their version of God than they were the paramilitaries, where nothing ever really happened. Lovely Lady competitions and bonnie babies.

And yet things did happen. I remember one time, for example, of not being able to get into the railway station shop, to pick up newspapers for my paper round, because somebody had been shot in the loyalist pub next door. Then there's the story of an ex-loyalist in the town. He had apparently served time for making the fundamental error from the loyalist POV of blowing up the British Legion by mistake (not sure if he ever claimed his Darwin Award!). Another loyalist who did time in the Maze, and who learned Gaelic to try to understand the communications of IRA men - and who subsequently fell in love with the language. And so on.

The point is that it is great to flesh out the context of our ancestors' lives from contemporary resources, but those resources, such as local newspapers, will never tell the whole story, despite being right on the doorstep. To address this, over the last five years I have actually been writing up an account of my childhood for my sons, painting a picture of the Carrickfergus where I grew up, the issues that affected my family (and not the middle class God-fearing "dressed in their Sunday best" elite in the town), and what made us tick.

My story of Carrickfergus is the story of being raised in a single parent family. Where everyone knew somebody involved in the Troubles but always turned the other cheek to look away. Where despite patronising ministers and unambitious politicians who only understood the word "Never" there were also some real heroes - the summer scheme volunteers at the Leisure Centre, acting as surrogate parents for a few hours every day in our long summer holidays; Paddy Lennox and his boxing club, designed to get boys off the streets and to give them something to think about other than orange or green; the strikers at Kilroot and the workers of Courtaulds fighting to save their living; of Third Carrickfergus Boys' Brigade, which despite its desperate attempts to drum a God into us all still produced some fine people into the world and an enjoyable way to socialise with friends after school for years; and the true heroes like Sean Neeson, a politician and family friend of real conviction who eventually rose to great heights within his party. It's the story of the working harbour where Kane's fuels were delivered each week, and where you could climb the castle's rocks or go fishing without a permit at the pilot boat base at the end of the quay. A town where the neighbours always had an open door and a cup of sugar or milk you could borrow before your dad could buy some more once he had picked up his dole cheque down at the 'broo'.

The Carrickfergus I lived in has long gone, and walking around the place last year, a lot had changed and some things have remained the same. West Street is a ghost town, and my old housing estate is now infested with paramilitaries, with their pathetic paintings on each gable end wall from a culture imported from Belfast shortly after I left in 1991.

The only place where the Carrickfergus I grew up in now truly resides though is in my memory - it will never return and that is why I am writing it all down now before it fades away.